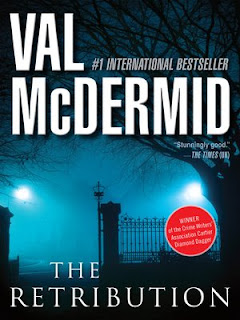 The Retribution is the seventh book in Val McDermid’s long-running, excellent series of police procedural, mystery-thriller novels featuring DCI Carol Jordan and Dr. Tony Hill, primarily set in the fictional city of Bradfield in Northern England. Hill is a criminal psychological profiler who uses his expertise to assist the police in tracking down lawbreakers (usually serial killers) by extrapolating information about the psychology and motivations of the perpetrators from the nature of their crimes and crime scenes. DCI Jordan leads the Major Incident Team (MIT), a handpicked collection of police officers with special skills (like lucrative computer hacking skills used for crime-fighting instead of profit) who often get results on cases that resist resolution by typical police methods.
The Retribution is centered around two problematic crime sprees. The first is a now-familiar series of horrific murders of “working girls” in the Temple Fields (red light/gay ghetto) section of downtown Bradfield. Each of the three killings is quite different from each other but each victim has the word “mine” tattooed somewhere on the corpse. It takes awhile for the police to recognize there’s only one killer involved because the bodies are in such variable states of intactness when they are discovered. Eventually the police do hand the case over to MIT. However, it will likely be the unit’s last case. Carol’s new boss has decided that having a cadre of specialized officers who work on the hardest cases and get good results is “too expensive” so she’s taken a DCI job at West Mercia and her team’s officers will likely be forced join the regular detective rotation if they stay in Bradfield. West Mercia, not coincidentally, happens to be near where Tony has recently moved into a huge mansion he inherited from his late estranged father in Fever of the Bone.
The second crime spree featured in The Retribution is significantly more serious. It involves one of the key villains from Wire in the Blood, one of the earlier, excellent entries in the Hill-Jordan series, Jacko Vance. Jacko was a television celebrity, one of the most recognizable faces in England when a member of Tony’s "baby profilers" (a group of police officers whom Tony was training to use his psychological techniques to suss out criminal motives) realized that Vance was a likely suspect in the disappearance of multiple teenage girls. Jacko killed the officer horribly just because he could, not because he was in serious danger of being revealed by her, but this event was the break that Tony and Carol needed to realize that Jacko was a serial killer. Now it’s many years later and Jacko manages to escape prison and he has a plan to seek retribution on the people that forced him to lose a dozen years of his life in prison. Jacko was assisted by a guy who never believed in his guilt to set Jacko up with a safe house, surveillance on his potential targets and ways and means to conduct his revenge. Of course, the first thing Jacko does when he’s in the safe house is stick a knife in his benefactor. And then he begins to successfully get his retribution on those who he thinks wronged him, which includes Carol and Tony. But, because he doesn’t attack them directly, but instead targets people and things near and dear to them, it takes awhile for Tony to figure out where Jacko will strike next and by then irreparable harm has occurred to those they love.
McDermid is rightly called the Queen of Crime for a reason. She is a Master at ratcheting up the level of suspense as one reads more and more of the book. One of her strengths is the clever way she doles out information to the reader about her characters and their motivations and actions. For example, we get a lot of first-person perspective from Jacko in The Retribution, so the reader can only watch with horror as we see him successfully commit his crimes while simultaneously seeing his pursuers struggle to even begin figuring out what’s going on. Additionally, McDermid does an incredible job at creating characters whose motivations are clearly described, leading to significant relationships. Access to the inner monologue of Tony and Carol as well as several of the secondary characters is a clear strength of the series.
Of course, the most significant relationship in these books is the one between Carol and Tony. Although it is not romantic, it is both more and less significant than a romantic relationship. For Tony, it is the most important relationship in his life. For Carol, Tony is her most important professional relationship, but she has more family support. The events of The Retribution are devastating to their connection, and one of the reasons to read the next book is to find out if their relationship survives and to read what happens next.
Overall, The Retribution is one of the most significant entries in the series, although I would not say it is one of the best. It definitely possesses McDermid’s now-familiar heart-pounding suspense, but both mysteries are not really that complicated since the who-dunnit aspect is minimal. (We know Jacko is one of them, and the second one is revealed pretty quickly. However in both cases it is the chase to see how/when/if the police can capture the perpetrator before they kill even more people which is the primary source of the suspense.)
The most memorable element is the sudden rupture in the Hill-Jordan relationship, but this change is surprisingly not well motivated and could be argued that it comes out of nowhere. Regardless, things will be different in the future for both of them, and I look forward to reading the subsequent books to find out what happens!
Title: The Retribution.
Author: Val McDermid.
Paperback: 413 pages.
Publisher: Little Brown.
Date Published: September 1, 2011.
Date Read: August 22, 2020.
GOODREADS RATING: ★★★★½☆ (4.5/5.0).
OVERALL GRADE: A- (3.83/4.0).
PLOT: A-.
IMAGERY: A-.
IMPACT: A.
WRITING: A.
Posted by Ron Buckmire at 9/24/2020 01:15:00 PM 0 comments

Fever of the Bone (Tony Hill/Carol Jordan, #6) by Val McDermid 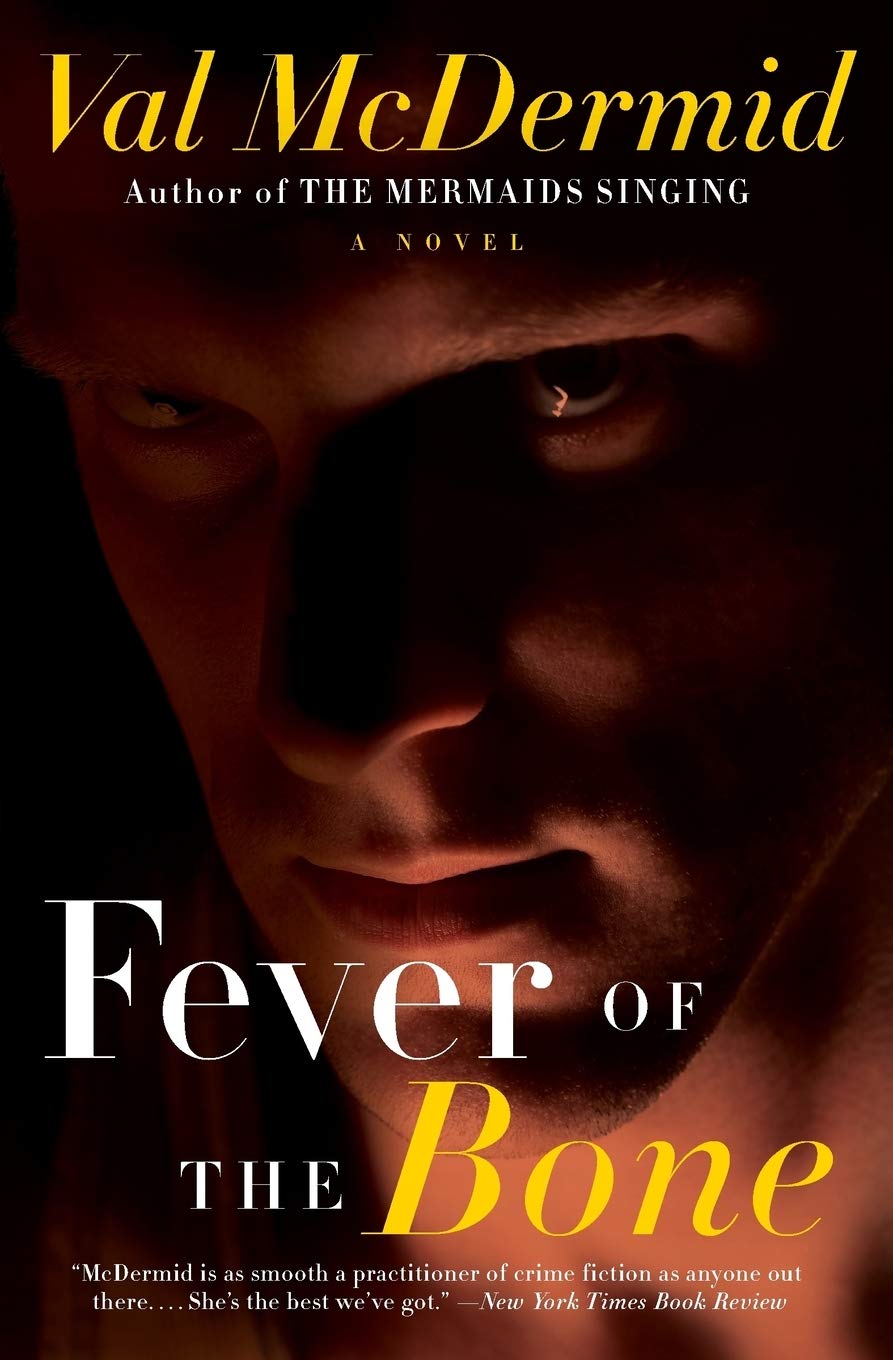 BOOK REVIEW: The Consuming Fire (The Interdependency, #2) by John Scalzi 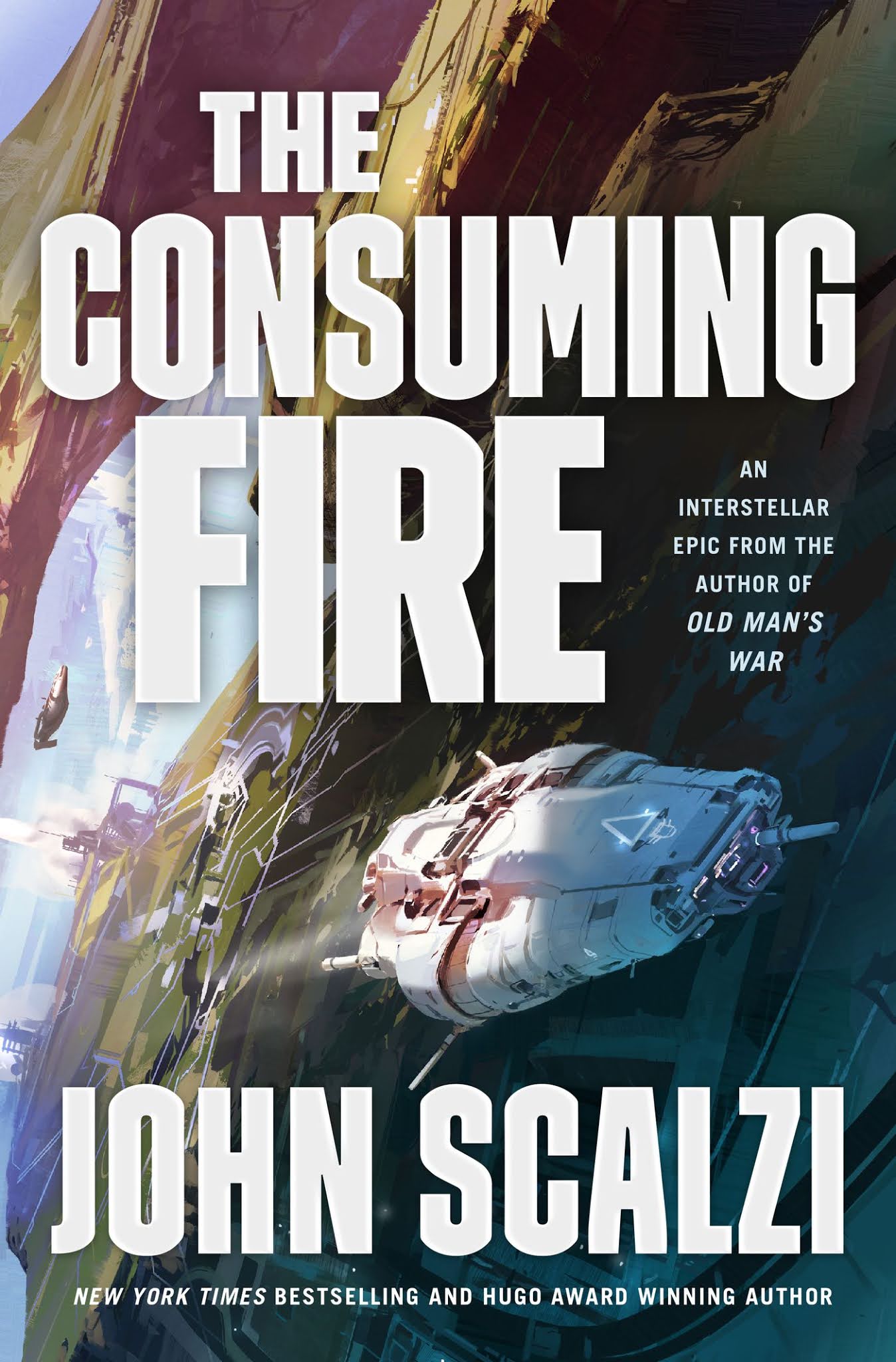 The Consuming Fire is the second book in John Scalzi’s The Interdependency space opera trilogy. I wasn’t terribly impressed with the first book in the series, The Collapsing Empire, but then again, I am generally ambivalent about Scalzi’s work. I do think Old Man’s War and Redshirts are his best books by far, and some of his other stuff is just not very good at all (looking at you, Lock In!)With Scalzi's recent press tour surrounding the release of the third and final book in the trilogy, The Last Emperox, I was reminded of the books’ existence and happily, Kindle copies were readily available at one of my local libraries.The good news is that the best parts of The Collapsing Empire, are in its sequel, namely lots of snarky commentary, snappy pacing and sympathetic characters (Emperox Grayland II, Lord Marce Claremont and Lady Kiva Lagos). There’s also a ridiculously convoluted plot with internecine palace intrigue taken to the extreme, but clearly points are being made about the nature of elites and concomitant corruption.I appreciate the difficulty of what Scalzi is trying to do here. He is combining humor with social commentary in the context of a putative space opera about advanced human civilization with near-magical transport methods and an extremely mercantilist society.I don’t know if I am just in a different place/mindset than I was when I read the first book, but I quite enjoyed the second book. I connected with Marce, Cardenia and Kiva in The Consuming Fire strongly enough that I was invested in what happened to them for the entirety of the book and I am also quite curious to find out what will happen to them next in The Last Emperox. That, at its most basic form, is a description of a successful book. Additionally, there are some interesting developments in The Consuming Fire about the existential threat to human society caused by the imminent collapse of The Flow, the multidimensional space through which most interplanetary travel occurs.Overall, The Consuming Fire is a very strong sequel to The Collapsing Empire, and an excellent and amusing space opera book in it’s own right. 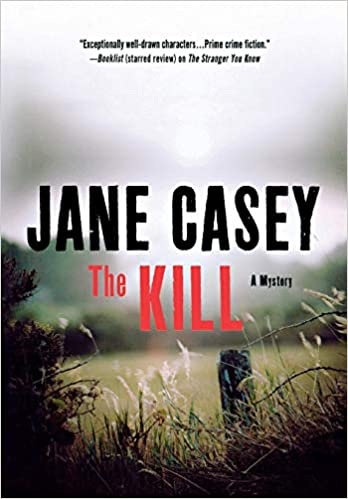 The Kill is the fifth entry in author Jane Casey’s British police procedural/murder mystery series starring Detective Constable Maeve Kerrigan of the London Murder Squad.The Kill begins with Maeve and her partner Detective Inspector Josh Derwent being called to the scene of an ambush shooting of a fellow Metropolitan Police officer in a parked car well after midnight. This appears to be the first of a series of fatal attacks on police officers in London, which is currently on edge following the mistaken killing of an unarmed Black youth by police officers recently.Jane Casey does another excellent job of showing the reader Maeve’s thoughts and beliefs as she navigates being one of the few women in her male-dominated detective squad. All Maeve’s relationships are complicated. Josh is an attractive/repulsive chauvinist who is passionately devoted to catching and punishing lawbreakers so he doesn’t have to think about the demons in his murky military past. Their boss, Detective Chief Inspector Charles Godley, is someone who Maeve simultaneously worships for his prowess as a leader and despises for his personal failings. In The Kill, we find out some very significant information about Maeve's boyfriend Rob, while the status of their relationship is very much in doubt by the end of the book.

As usual, Maeve makes the key connections that lead to the resolution of the main mystery. Happily this time she is not placed in mortal danger as she tracks down the perpetrators but others near to her definitely find themselves in risky situations and this ensures that The Kill has a thrilling conclusion.