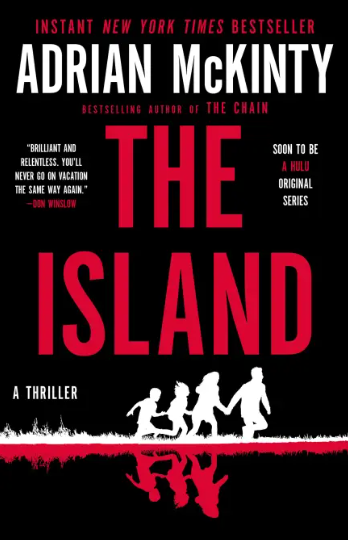 The Island is the latest blockbuster suspense thriller from Adrian McKinty, the author of the best-selling The Chain  and six well-regarded police procedurals with titles based off of Tom Waits lyrics set in Northern Ireland during “The Troubles” era featuring a Protestant cop named Sean Duffy. The Chain is well-known for its killer premise, addictive pacing and plot twists; The Island shares several of these attributes.
The premise of The Island is apparently sourced from an actual incident experienced by McKinty that didn’t go as wildly wrong as what happens in the book: a car accident on a private island a short ferry trip from a major city (Melbourne in this case) where a single family has controlled life (and death) for multiple generations. In McKinty’s real-life version the accident was avoided and no one was harmed, but in the version in The Island a young deaf woman rides her bike suddenly into an oncoming car carrying a vacationing American family of four (a 40-something doctor named Tom, his 20-something second wife Heather and two kids, Olivia, 14 and Owen, 12). The parents, make the fateful decision to leave the scene of the accident in the hope they can resolve whatever consequences occur from the comfort and safety of the mainland. This turns out to be a spectacular bad choice that results in multiple violent deaths.

The Island turns into a suspenseful story of survival as the wife and kids are separated from their husband and father and are literally hunted by the few dozen inhabitants of the island. In such an extreme situation, everyone involved is forced to identify their limits and go beyond them in different ways. Olivia and Owen are recovering from the death of their mom, Tom's first wife and are resentful of Heather, who is much closer to their age then she is to their parents. Heather is still getting used to the idea of being responsible for two teenaged kids at the age of 24 and getting to know her new husband who views the world substantially differently from his perch of privilege and experience. That these emotional undercurrents have to be navigated and resolved while they are trying to escape a life-and-death situation on Dutch Island are the primary narrative fuel of The Island.

McKinty does many things quite well in The IslandFirst, he successfully gets the reader to invest in the fate of the characters. He provides the reader with the internal thoughts of multiple characters and uses this mechanism to help the reader connect emotionally with them, especially Heather. Second, he writes action scenes incredibly compellingly, and there is a LOT of action (and violence) in The Island. Third, he is not afraid to have real consequences for the characters for the decisions they make. Because, there are serious (and life-changing) injuries inflicted on multiple characters, this raises the stakes for the reader in speculating about the possible fates for the character or characters we are invested in knowing what happens to in the end.
That’s not to say The Island is not without flaws. It is so obvious about its intent to be breathlessly suspenseful that at times the plot becomes wildly unrealistic and shamelessly manipulative. But once the reader gives into the breakneck pace of the plot and accepts that The Island is going to be a roller-coaster, the book is an enjoyable bit of fluff (and its quite a quick read at 384 pages).

Apparently The Island is being made into a streaming “television” series for Hulu, which I think will work well. I could see it turned into an addictive suspense drama like Fox’s 24 where every hour/episode ends with a cliffhanger.

Overall, I would recommend The Island to anyone who read and enjoyed The Chain (which according to sales figures, critical acclaim and social media buzz, is a LOT of people!). 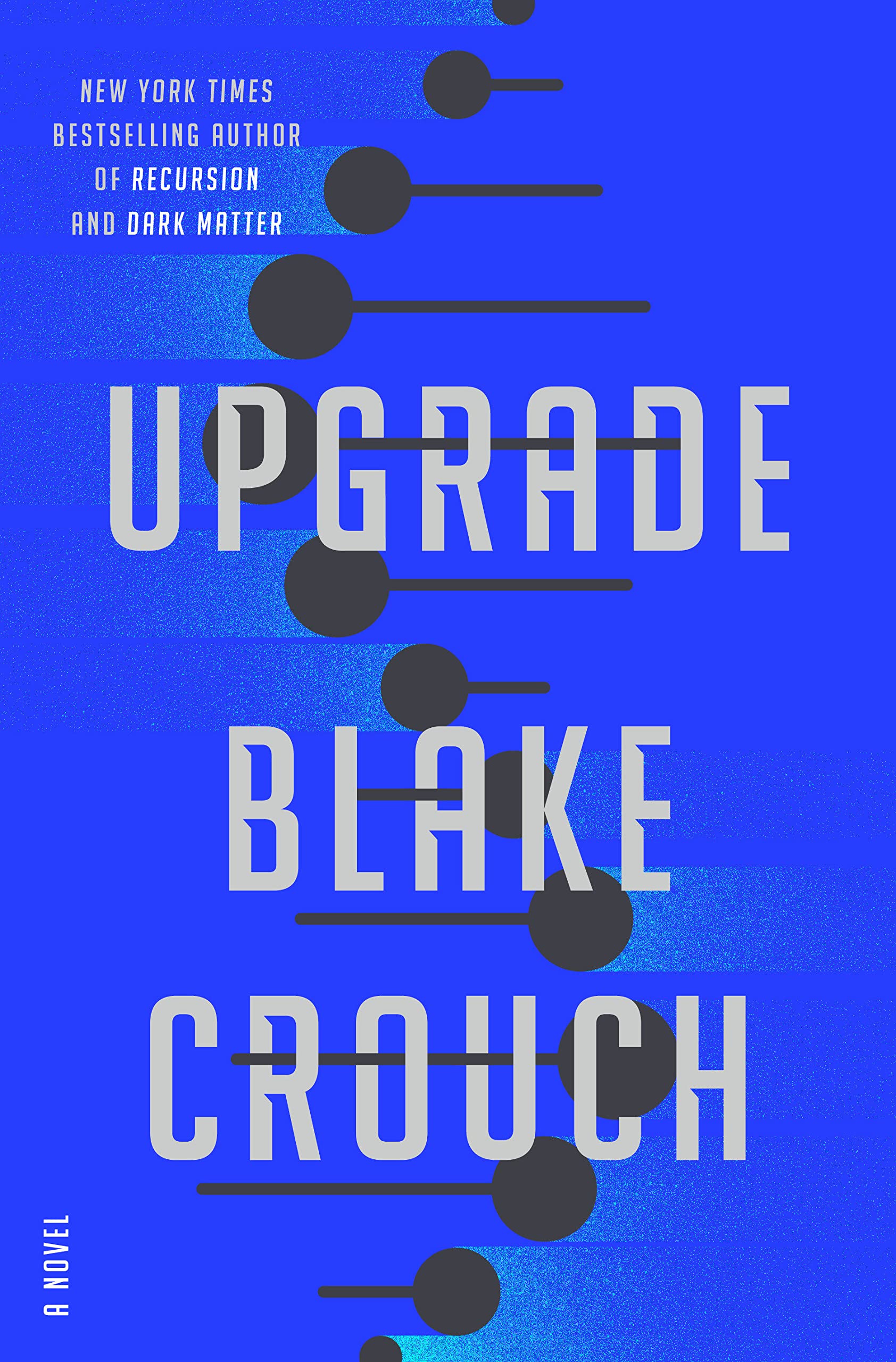 Upgrade by Blake Crouch is the latest book from the author of other technothrillers such as  Recursion and Dark Matter.  I think I have read enough Crouch novels by now to notice a common theme: the main character is usually a straight white guy with a family who finds himself in an extraordinary situation (typically involving a technological advance that seems like or actually is science fiction) that he has to resolve through ingenuity and taking decisive (sometimes violent) action. Below I will provide evidence for my view by summarizing the three Crouch novels I have read so far.

In Recursion, the main character is Barry Sutton, a straight white NYPD detective who got divorced after his young daughter was killed in a hit-and-run accident ten years before. Barry learns that the recent increase in FMS (False Memory Syndrome) is a result of a technological advance that allows certain people to reset reality for everyone else; the false memories people are experiencing are really memories of the previous reality which has been erased that somehow are lingering on in their consciousness. Barry has to figure out what he can do to restore reality, and decide if he can and should select a reality where his daughter doesn’t die.

In Dark Matter, the main character is a straight white guy named Jason Dessen, a former quantum mechanics scientist and physics college professor who has a wife Daniela and a baby son Charlie. One day Jason regains consciousness while stumbling out of a metal cube. He realizes that he is in an alternate universe where 15 years ago the alternate version of Jason (which he calls Jason2) decided NOT to marry Daniela and instead pursued his quantum mechanics research and ended up creating a device (the metal cube) that allows people to jump between parallel universes. Jason2 has swapped places with Jason in order to explore what his life would have been like if he had pursued Daniela instead of research. Jason has to figure out how to get his life back from a more ruthless version of himself, Jason2.

In Upgrade, the main character is Logan Ramsay, a straight white guy married to a female history professor who teaches at American University in Washington, DC and has a tween daughter who regularly beats him in their daily chess game. Logan works for the GPA (Gene Protection Agency), a federal agency tasked with enforcing the Gene Protection Act, which outlawed all gene manipulation and research in the United States. The GPA also authorizes universal, invasive  surveillance of all U.S. citizens in order to enforce the ban on gene research and resulted in the incarceration of most biotech scientists. The legislation is a(n over)reaction to “The Great Starvation,” a cataclysmic event that was triggered by the release of genetically modified locusts in China by Logan's mother Miriam Ramsay in order to try to improve rice production a decade before the events in Upgrade. Miriam Ramsay was well known as a brilliant scientist and one of the richest people in the world before her experiment resulted in the starvation deaths of hundreds of millions of people around the world. Logan’s mother killed herself soon after the magnitude of her mistake became clear and Logan went to jail for multiple years for his minor role in the event (as an assistant). During a routine raid to find a rogue geneticist Logan is infected with some biochemical agent which after a few weeks he realizes has upgraded and altered his genome, giving him all sorts of enhanced abilities like increased concentration and mental acuity, thicker bones, and speed and agility. Of course the GPA outlaws all gene modification so when the extent of his abilities becomes clear Logan is kidnapped by his own co-workers and taken to a secret site where they can observe him and monitor his changing body. He gets busted out of the secret prison by someone who has very similar upgraded abilities to him; this turns out to be his sister Kara.

This somewhat brief summary of the beginning of Upgrade may seem like it contains spoilers but really this is just the initial setup to the main plot of the book and leaves several questions for the reader. Such as, who designed this upgrade? What will it mean for the future of society if it is effective, especially a society where gene enhancement is so prohibited and everyone’s actions are monitored so closely? Could Logan's mom be involved somehow?
One of the main features of Crouch’s writing is that the action is literally fast and furious. He’s also pretty skillful at depicting his main character in a sympathetic manner so that the reader is caught up in the circumstances that affect him and wants to see how or if he can figure out a way to survive them. This is especially the case in Upgrade, which like all the other books by Crouch I’ve read really seems like a spec script for a Hollywood blockbuster or hit streaming TV show. There’s thought-provoking technology in a world similar but significantly altered from our own, with a sympathetic protagonist facing long odds to succeed. What’s not to like? One quibble I have is that these books are starting to seem a little too glib and formulaic. As I’ve pointed out above, Crouch’s last three books have noticeable similarities. However, they have also all been huge hits and big bestsellers. The guy is good at what he does! There's also something plastic/uncompelling about his main character's relationships with other people. In Upgrade, Logan has a complicated (and slightly bizarre) relationship with his sister Kara. It's like Crouch's characters have facsimiles of relationships, not the real thing. I think this is what causes me to not connect emotionally with his books. (But they are still a delight to read.)
Overall, I’d recommend Upgrade to anyone who has read and enjoyed Dark Matter and/or Recursion.