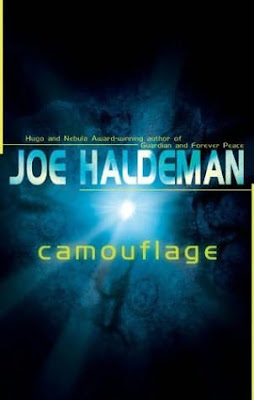 Joe Haldeman is one of science fiction's most honored writers. His book, Camouflage, won the 2005 Nebula Award for Best Science Fiction Novel, beating out the more celebrated debut novel from Susanna Clarke, Jonathan Strange & Mr Norrell, which won the Hugo Award for that year.

Haldeman also has the rare honor of publishing two novels which have won the Nebula and the Hugo Award for Best Science Fiction novel of the year: The Forever War and Forever Peace.

Haldeman has a very readable, simplistic style of writing which makes his work easy to underestimate but very easy to consume.

The plot of Camouflage is quite clever; it involves following the lives of two alien creatures that are living among us: the chameleon and the changeling.

The chameleon is the "bad alien." It is able to mimic any humanoid form and appears to have an innate desire to kill humans. The changeling is able to change its shape more completely, even into non-humanoid forms (like a shark), although the process is painful.
It seems to have innate desire for knowledge and earns multiple degrees at Harvard.

The plot is sparked by the discovery of an artifact deep in the Pacific Ocean which appears impermeable to human instruments. Both the changeling and chameleon are attracted to the artifact.

Haldeman has an engrossing, very readable, somewhat simplistic writing style that makes his books fun to read and Camouflage is no exception.