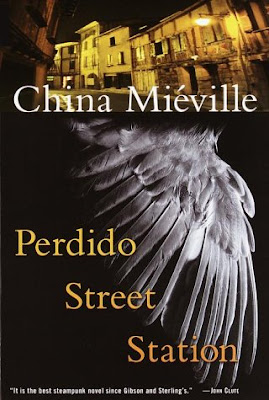 China Miéville's Perdido Street Station is an incredible work of speculative fiction. It won the Arthur C. Clarke award and was nominated for both the Hugo and Nebula awards, the two most prestigious awards in science fiction and fantasy books.

Miéville's work is incredibly complex, weird and engrossing. It is somewhat reminiscent of the work of Octavia Butler in its singular views of alien sex, compellingly detailed depiction of complex societies and intricate plots.

Perdido Street Station is a gripping, horrifying read which epitomizes the very best of speculative fiction.

The story is set in New Crobuzon, a sprawling, dirty, bustling metropolis on an alien world which is probably Miéville's most signal literary achievement. New Crobuzon is a city-state as rich, diverse and powerful as ancient Rome or Athens. It is populated with various kinds of creatures, the most prominent of whom are humans, khepri (they have insectoid heads on human female bodies), cactacae (humanoid-cactus hybrids) and vodyanoi (aquatic beings with webbed feet who can manipulate water to form structures and can not survive without getting their skin wet for more than a day).

The plot is so complex it is difficult to be easily summarized (this is a common problem with Miéville's books) but the most memorable strand to me centers around common nightmares which everyone in the City starts having, which (unsurprisingly) turn out to be related to the fact that certain people are not waking up at all...

Oh, and there's a geeky mad scientist, The Devil himself and an uprising of an enslaved underclass--and those are just story elements!

Perdido Street Station is not for everyone, but I bet that almost everyone will enjoy it.

I LOVE IT WHEN U DO THIS!

I was pretty underwhelmed by this book. You're slippin', Ron

He's definitely an acquired taste and doesn't always hit the mark (see THE CITY & THE CITY) but PERDIDO STREET STATION and THE SCAR are bonafide classics...


If you like fantasy more, have you checked out "The Warded Man" by Peter Brett?