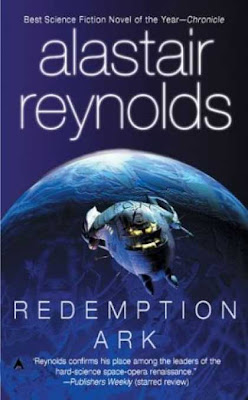 Alastair Reynolds' Redemption Ark is the second novel in his Revelation Space series. I was turned on to this work by Mark Chitty's Walker of Worlds blog, who is also a big fan or Peter F. Hamilton and Neal Asher, two other big British science fiction writers.

Midway through reading the first book (see MadProfessah review) I ordered the next two books of the series from Alibris.com right away.

The best part of  Redemption Ark is the return of two of the main characters from the first book, Ana Khouri and Irina Volyova. Additionally, Reynolds introduces us to the Conjoiners, technologically advanced humans who have learned how to integrate nanotechnology with human physiology so that they have greatly increased strength and speed, machine-level mental processing capacity and speed as well as the ability to network with all other Conjoiners within range. Basically, to a Conjoiner any form of electronics is not only accessible but manipulable.

Of course, this being Reynolds, the plot of the story is the main attraction, and boy is it a doozy. Following on the events of Revelation Space, the powerful "hell class" weapons that are housed in the bowels of the 4-kilometer-long ship called Nostalgia for Infinity become the prize for a trio of very determined individuals.

The first member of the group looking for the weapons are a group of Conjoiners headed by a woman named Skade. The second group is led by Skade's previous deputy named Clavain who had defected from the group of humans called the Demarchists who are currently fighting an interstellar war against the Conjoiners when his Demarchist commander brother tried to kill him. Clavain finds out that Skade has developed a fleet of ships that can fly very close to the speed of light in order to have an "escape route" to another galaxy if the Inhibitors from Revelation Space, predatory machines (dubbed "Wolves") who exterminate species whom they detect have achieved interstellar flight, decide to eliminate humanity. The third group consists of Khouri and Volyova, who (together with archeologist Dan Sylveste) discovered the Inhibitors' purpose in the Resurgam system and currently have possession and access to the weapons in the hull of Nostalgia for Infinity. By using the hell class weapons Volyova and Khouri in the first book Revelation Space not only alerted the Inhibitors of humanity's existence but also alerted the Conjoiners of the existence and location of the hell class weapons (which they had created and lost hundreds of years before).

In addition to a race to get to Resurgam by the two Conjoiner factions, Redemption Ark features multiple asides in which Reynolds provides extensive the details of the Wolves. They turn out to be machines intelligences who have been around for billions of years and are culling life in order to save it from extinction when the Milky Way collides with the nearest galaxy in a few billion years. The characters of Volyova and Khouri are fleshed out and Clavain is also a very interesting new character.

The result is a very exciting work of very hard science fiction replete with fascinating ideas which is probably the high point in the Revelation Space trilogy.