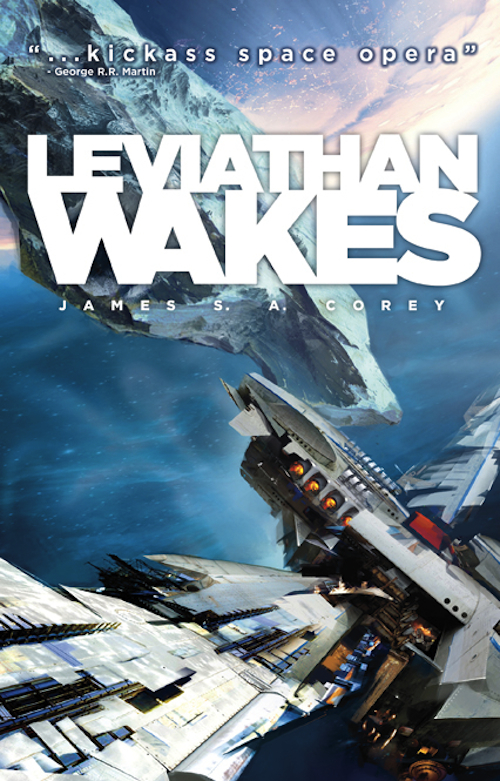 One of the best new hard science fiction reads of the year is Leviathan Wakes from James S.A. Corey. Corey is actually a pseudonym for Daniel Abraham and Ty Franck. Surprisingly, both of these guys are known for their fantasy bona fides. Abraham is the author of The Dragon's Path, the first book in the Dagger and the Coin trilogy while Franck is George R.R. Martin's assistant. Martin, is, of course, the author of the wildly popular A Song of Ice and Fire series, whose first book the Emmy award-winning HBO mini-series Game of Thrones is based on.

It's interesting that with all this swords and sorcery experience that these two guys have written an absolute kick-ass hard science fiction classic. The universe of Leviathan Wakes takes place in a near future where humanity has established colonies on some of the solar system's planets and large asteroids. To be more precise, Mars, the Moon, and Ceres all have substantial human populations, with distinct and disagreeing cultures. The two big fish are Mars and the Earth, with the Moon and all the inhabitants of the Asteroid Belt (known as "Belters"). There are no aliens, but there are generations of humans that have only lived in non-Earth gravity and have been physically modified as a result.

The story that is set in this universe is a doozy. It is centered around two main characters: Jim Holden and Detective Miller. Holden is the "good guy," an idealist who runs into some Lovecraftian surprises in deep space of galactic significance. Miller is the hard-bitten detective who doesn't even have a first name who doggedly follows his hunch about a case no-one else cares about while history-altering events are happening around him.

The book is an interesting melange of multiple genres; it is definitely hard science fiction (there are space battles with sub-light space travel in the very first chapter) but veers sharply into horror (there are things called "vomit zombies") with a sprinkle of noir (Miller's character is clearly supposed to be some kind of 23rd century Sam Spade).

I don't want to say too much about the details except to say that the story hurtles along at breakneck pace, and although many issues are resolved, one can clearly see how this works as the first book of a planned trilogy. I can't wait until the next book in "The Expanse" series is released; if you read Leviathan Wakes, you will be hooked as well.