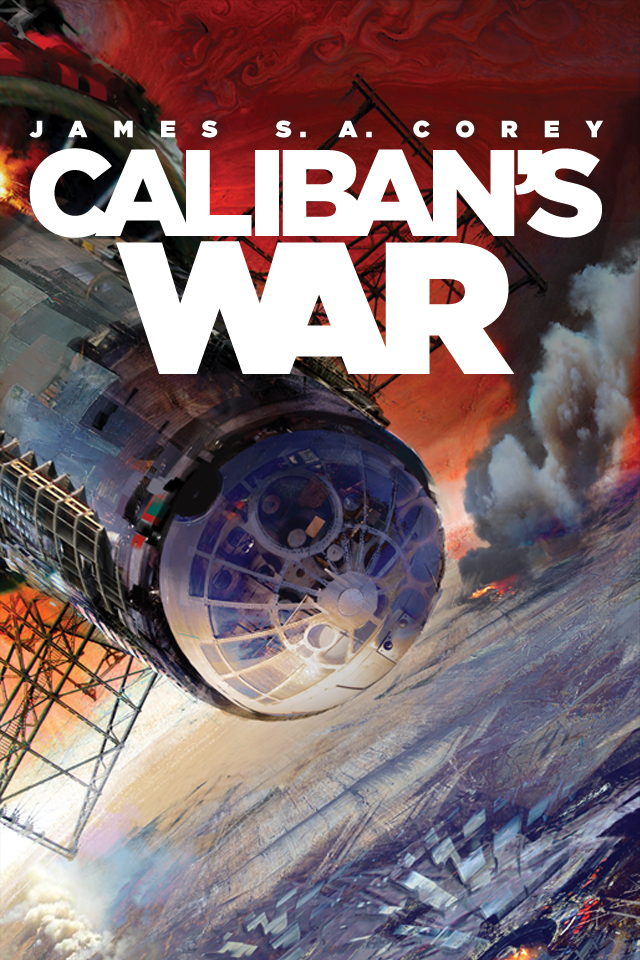 The second book in The Expanse series by James S.A. Corey is Caliban's War and was one of my most anticipated reads of 2012. The first book was the thrilling Leviathan's Wake (read my review here). One of the most difficult things for any artist to do is follow a successful debut creation with another piece that is regarded to be of commensurate quality as their first work.

However, happily, Daniel Abraham and Ty Franck (the two authors who write together under the pseudonym James S.A. Corey) have managed to accomplish this rare feat in Caliban's War, a work that is at least as good as their debut novel.

Although Caliban's War is a sequel, it also works as a stand-alone story. And what a story it is. The plot lterally begins with a bang and continues at a breakneck pace. It begins with a new kind of alien super-creature absolutely decimating an entire squad of Martian marines on Ganymede. The crew of the Rocinante, a spaceship with Jim Holden as captain who is basically the main characters of Leviathan's Wake, are again some of the main actors in the sequel. Corey uses the same literary device as their more famous George R.R. Martin mentor which is that each chapter in the book is told from the perspective of the named character. The cast of characters who have named perspective chapters is expanded from the two (Holden and Detective Miller) from the first book by the inclusion of Gunnery Sergeant Roberta "Bobbie" Draper (the only person to survive the initial alien attack), Chrisjen Avarasala (a powerful United Nations functionary and fierce grandmother), and Praxidike Meng (a biologist and father of a kidnapped little girl named Mei).

The inclusion of the points-of-view of these new characters generally strengthens the emotional connection the reader has with the story in Caliban's War (and also deals with the lack of female representation in the first book). Avarasala quickly became my favorite character in the series so far, with Bobbie a close second.

The plot of the second book is even more complex than the first, with overlapping and competing sub-plots which are fueled by interplanetary politics and the evil deeds of globe-spanning corporations. The proto-molecule, which was discovered in the first book to be the source of "vomit zombies" and the first clear evidence of the existence of aliens, has now apparently completely taken over the entire planet Venus. It is not completely clear what it is doing to that planet, because the surface is completely covered by clouds but there are strange power surges being remotely recorded. The primary plot involves Rocinante and its crew getting involved in the search to find Prax's kidnapped daughter, while the events on Ganymede (which are also probably related to the proto-molecule) lead to a pissing match between the major political factions in the solar system: the Belters, Earth and Mars that requires all of Avarasala's prodigious diplomatic skills to settle.

Caliban's War is an example of exhilarating space opera that anyone who is a fan of the work of Peter Hamilton, Alastair Reynolds or Stephen McCauley will almost certainly enjoy.