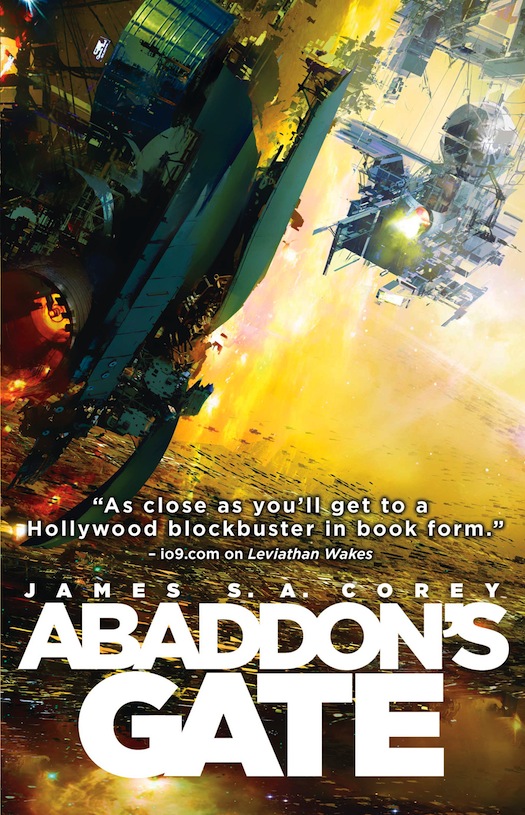 The third book in the Expanse series by James S.A. Corey is Abaddon's Gate. Happily, it maintains the quality of the first two entries Leviathan Wakes and Caliban's War, which were both excellent examples of sci-fi space opera at its finest.

Abaddon's Gate continues the story by following the series of events that are happening to Jim Holden and the rest of the crew of the spaceship Rocinante that began in Leviathan Wakes and Caliban's War.

The structure of these books is that the story is told from the point of view of various characters, which in this book are Holden, Anna Volovodov (a lesbian pastor from Europa who is part of a humanitarian contingent sent to investigate the anomaly called "The Ring" that has formed at the edge of the Solar System in the end of Caliban's War), Clarissa Mao (the sister of Julie Mao who was one of the key characters who died in Leviathan Wakes; Clarissa is masquerading as Melba and is determined to kill Holden as revenge for the part he played in her sister Julie's death) and Bull (security officer on Behemoth, the largest ship in the fleet of the Outer Planets Alliance, which is also on its way to The Ring).

Sadly, key characters from the previous books do not return in the latest book, most notably Undersecretary Chrisjen Avasarala (the profane grandmother who while appearing to be a mid-level functionary in the United Nations is probably the most important on Earth) and Sergeant Bobbie Draper (a Martian Marine who was the sole survivor in the alien attack on Ganymede that catalyzed events in Caliban's War).

The only character who has had POV chapters named after him in all three books is Holden. What Corey seems to be doing is introducing new characters in each book while simultaneously ramping up the action  and expanding the scale of the plot.

The Expanse series (as it is now called) is most well-known for incredibly detailed action sequences, wry humor, political intrigue and thoughtful and nuanced characterization. All of these features are apparent again in Abaddon's Gate, in addition to another aspect of the books: pulse-pounding suspense!

Although the series was initially conceived as a trilogy the great news is that the series has been expanded to six books, and the fourth book in the series, Cibola Burn, will be released on June 17, 2014. I can't wait!