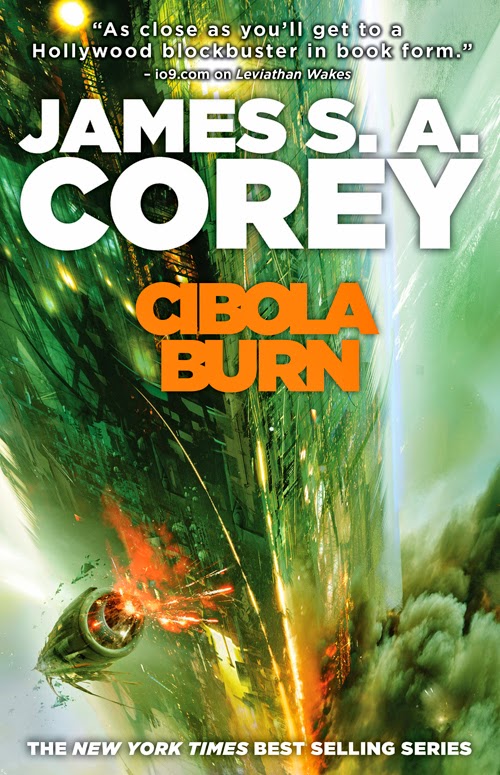 The fourth book in The Expanse series by James S.A. Corey, Cibola Burn, was released on June 17, 2014 and I devoured it in three days. Things are going well for Corey right now as earlier this year it was announced that SyFy has decided to make a television series out of The Expanse books, ordering a first season of 10 episodes, describing it as their "most ambitious" series and "Game of Thrones in space." Then, just a few weeks after Book 4 (Cibola Burn) of the series was published, they learned that Book 3 (Abaddon's Gate) won the prestigious Locus Award for Best Science Fiction. Other books that have won the Locus award include classics of the genre like Foundation's Edge by Isaac Asimov, Doomsday Book and To Say Nothing of the Dog by Connie Willis and 3 of the 4 books in the Hyperion cantos by Dan Simmons. Great company! As you can see from my review, Abaddon's Gate is a really good book, but the truth is that Cibola Burn is possibly even better!

Abaddon's Gate is like a roller-coaster, a thrilling ride that ends with an "oh ****!" sequence that completely upends the set of rules we thought the Universe was abiding by, opening up the story to dizzying set of possibilities. Cibola Burn is not as "big" a story as Abaddon's Gate, but it is even more suspenseful (which I did not even think was possible). Cibola Burn is really more like a very good Western. After the events of the previous book (*spoiler alert*), there are now thousands of star systems, with who knows how many habitable planets, for humanity to expand to. So, basically there is a land rush on, and Cibola Burn is set on Ilus, one of the first planets that has been colonized by former Belters (people who were born and raised in space, in the Asteroid Belts). However, a mega-corporation named Royal Charter Energy who gets a charter from the United Nations to explore the planet (which they call New Terra) and its resources (especially it's very import lithium deposits). But by the time the RCE ship gets there, Belter colonists have been there for more than a year and someone plants a bomb and destroys the landing pad, damaging the main shuttle, killing the official UN representative (and most importantly) preventing RCE from getting a secure foothold on the planet.

Because even the fastest ship would take the better part of a year or more to get to the planet (and even signals from Earth take several hours to be transmitted), the humans are on their own trying to settle what is essentially a property dispute in a jurisdiction where the rules are "TBD." This is basically a wild, wild west scenario. So, how will humans in the future advanced civilization deal with an uncivilized situation rife with conflict?

This is the powder keg that Corey has set up as the primary explosive force behind the plot developments. For the first time in the series, the entire book basically deals with problems pertaining to one planetary system. Although there's also a bunch of new characters, the people we have been following for four books: James Holden (captain of Rocinante), his lover (and Rocinante executive officer) Naomi Nagata,  pilot Alex Kamal and chief engineer Amos Burton return and we get to learn a lot more about them. My favorite character in the series, Chrisjen Avarasala (the profane grandmother who basically is the most powerful person on Earth), has a too-brief cameo in the Epilogue chapter along with Bobbie Draper, the huge female Marine who is so important in Caliban's War.

In addition to these characters, there are new people in the story who we get point-of-view chapters from: Basia (a Belter colonist on Ilus who is a father of two teenagers a bit over his head), Elvi (a Earther scientist who is sent by RCE to investigate alien life on the planet and finds herself the subject of one of her own experiments) and Havelock (an Earther who is working in the security department on the RCE ship and has appeared in previous books in the series in more limited fashion). Of these my favorite was Elvi (demonstrating once again that the all-male duo that is James Corey can fully realize female characters with the best of them!) However, the most memorable new character is the villainous Adolphus Murtry, the chief of security on the RCE ship and who turns out to be a psychopath).

amazingly, Holden is sent to Ilus to serve as a United Nations representative to mediate between two groups of people who feel like they can basically justify any action if it leads to their desired result of control over this new planet. Since we know from the first three books in the series that Holden is pretty headstrong himself (and diplomacy is not his strong suit) it should not come as a surprise that the situation on Ilus/New Terra (the warring factions can't even agree what to call it) goes from bad to worse. And then the crazy alien stuff starts happening.

In my opinion, Cibola Burn is the best story in the series so far. It is incredibly suspenseful and exciting. However, in terms of the overall Expanse series there is not much development in answering some of the larger questions of the series (except one very big event that happens towards the end of the book that I will not spoil for you here except to say that it involves the protomolecule from Leviathan Wakes) and that is somewhat disappointing but frankly I was so gripped by the overall story that I absolutely devoured the book (which is not small) in roughly two days of reading.

The only bad thing about finishing this book so quickly is now I have to wait almost an entire year until Book 5 comes out. But I am cheered by the news that the series has been expanded from the original trilogy to nine books. Let's hope the SyFy television series will be as successful!