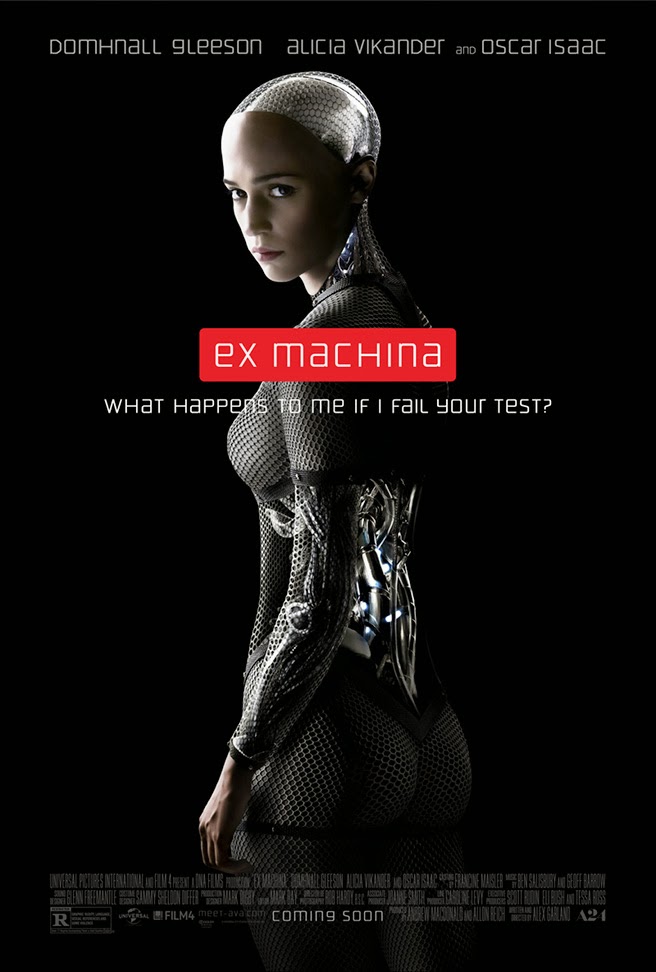 For some reason I have been so busy that I have not been able to see any new movies in the theater this year. However, since I am a fan of 28 Days Later and Sunshine, which were both directed by Danny Boyle (Oscar winner for Slumdog Millionaire) and written by Alex Garland I was intrigued when I saw that Garland had written a directed a new movie, called Ex Machina, which also happens to be a science fiction thriller about artificial intelligence.

Ex Machina is a thought-provoking science fiction thriller. The story revolves around a young computer programmer Caleb (played by Domhnall Gleeson) who wins a company contest to spend a week at the home of the billionaire head of the world's largest internet search firm named Nathan (played by Oscar Isaac). When Caleb gets there he find out that he has really been asked there to evaluate a new android (a humanoid form of artificial intelligence) called Ava (played by Alicia Vikander). Nathan tell Caleb he wants him to apply the Turing Test to Ava. The Turing Test is named after the openly gay genius Alan Turing  (whose story was featured in The Imitation Game) and basically involves a scenario in which the judge interacts with a being it can not see. If the judge can not distinguish between the responses of the being and what the judge would expect from a human, then the Test has been passed because for all intents and purposes the being (which is actually a computer or machine or artificial intelligence) is indistinguishable from a human.

However in the context of the movie, the Turing Test doesn't really make much sense because when Caleb meets Ava, who indeed looks like no other android we have seen in a movie before, he already knows that she is a robot. However, Caleb and Ava spend a lot of time together and soon two things becomes clear: 1) Caleb is falling in love with Ava (or Caleb is being seduced by Ava) and 2) Nathan is an obnoxious asshole.

Watching Caleb and Ava get close is interesting because we know that Caleb knows that she is a robot and yet it becomes increasingly obvious that he is attracted to her. The more interactions we have with Nathan the less appealing he becomes. He has a Geisha-like servant named Keiko who does not speak any English and whom he basically treats like his property. Caleb and the audience can see that there are cameras and recording devices everywhere which allow Nathan to monitor interactions between Caleb and Ava yet still they make plans to help her escape once Caleb's week comes to an end.

The film culminates in some developments whichI do not want to reveal here but which are ultimately quite satisfying especially since the audience is pretty sure we know where the story is going but Garland's script and direction have the ability to surprise and delight.