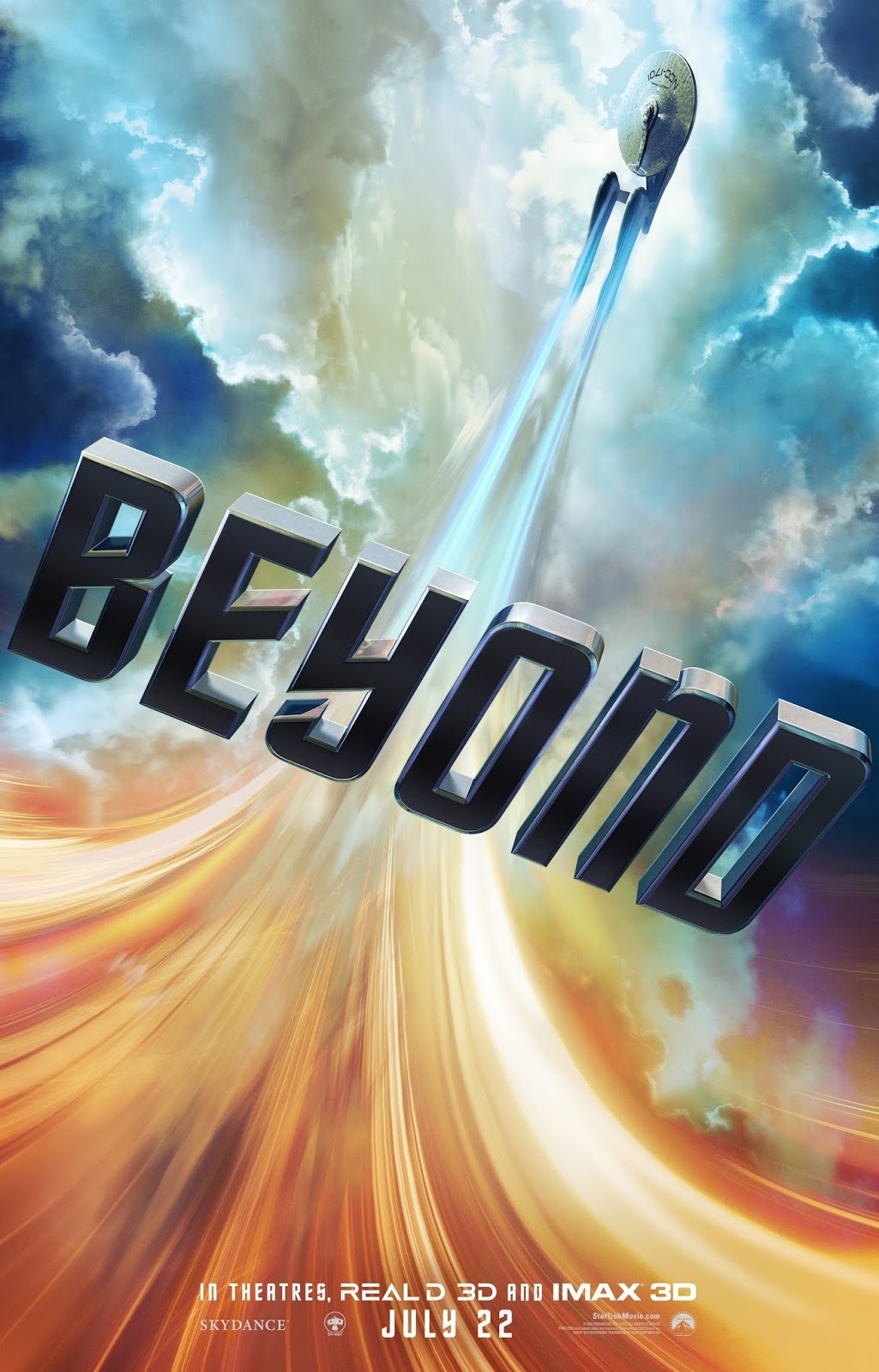 I had heard that Star Trek Beyond was not getting great reviews, but since I have been a longtime fan of the franchise (beginning with watching the original series reruns in the early 1970s as a kid and continuing with the Star Trek: The Next Generation series in college). I think I have seen every Star Trek movie there is (except perhaps one of the last movies with the ST:TNG cast). I've also seen and enjoyed) the first two Star Trek movies 2013's Star Trek Into Darkness and 2009's Star Trek with the rebooted cast starring Chris Pine as  Kirk, Zachary Quinto as Spock and Karl Urban as Bones. Anyway, with me, it was not whether I would see this movie, but when. And after hearing that John Cho's version of George Takei's Hikaru Sulu would be depicted as openly gay (having a male partner he's raising a daughter with) I got tickets to see it opening weekend!

My worries about reviews were unfounded since Star Trek Beyond is certified fresh at Rotten Tomatoes with an 85% rating. This is (slightly) lower than the first two movies, which had 95% and 86% ratings, respectively.

One interesting difference of the latest entry into the Star Trek movie franchise is that it was co-written by Simon Pegg (who plays Scotty, primarily as the comic relief) and  JJ Abrams has relinquished the director's role to Justin Lin but still is listed as a producer.

The most compelling aspect of the film is the killer casting and the nuanced performances as updates of the original characters. The three leads are (mostly) excellent, but in the smaller roles, Zoe Saldana as Uhura, Cho as Sulu and and Pegg as Scotty all standout. As with most summer blockbusters, the effectiveness of Star Trek Beyond is dependent on how good (or bad) the villain is. The villain in Star Trek Beyond is Krall, played quite well by a mostly unrecognizable Idris Elba. There's also a new female character named Jayla played by Sofia Boutella (last seen as the woman with the crazy blade legs in Kingsman: The Secret Service).

The story this time is built around central themes of loss as we see Spock learning about the death of Ambassador Spock (played by Leonard Nimoy of course) who actually represented Quinto's Spock from a different timeline that intersected in the 2009 Star Trek. We also learn that Spock is thinking of leaving Starfleet and has broken up with Uhura again because in light of the destruction of his homeplanet he is feeling compelled to try and go to New Vulcan to find a Vulcan mate and contribute to rebuilding Vulcan society and culture. Unbeknownst to Spock, Kirk is also thinking of leaving the crew of the Enterprise, and has applied to become a Vice-Admiral at a huge space station near a mysterious nebula.

Of course, the Enterprise ends up exploring the nebula where it gets attacked by a huge swarm of powerful alien spacecraft that forces the crew to abandon ship as the saucer section is forced to separate and crashes on a planet. Krall captures most of the crew (with Uhura and Sulu) but Bones and Spock, Chekhov and Kirk and Scotty land on the planet in separate groups. It was good to see that Chekhov had a larger role than in previous films due to a freak accident that killed the 27-year-old actor Anton Yelchin last month which means he will not be appearing in any more sequels.

In the end, the crew is reunited and we learn that even Starfleet officers can become corrupted and that people will come up with all sort of rationales to justify horrific actions. The visuals are exciting and the action is frenetic but overall this was a better than average entry into the Star Trek movie franchise.