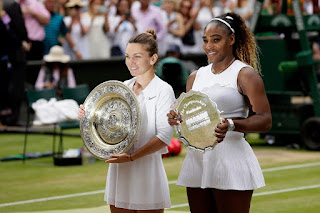 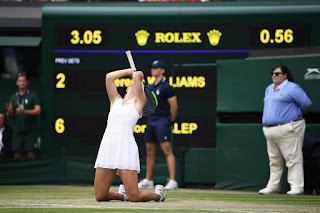 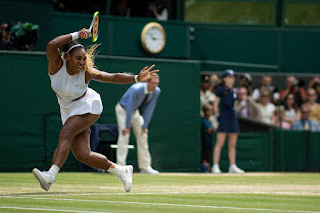 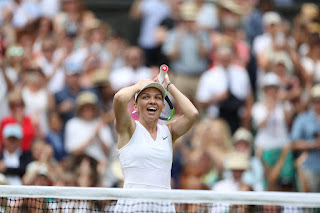 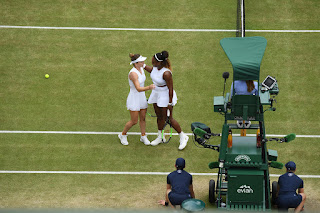 To the surprise of most observers, World #7 Simona Halep put on a devastating display of accurate, defensive, propulsive tennis on Wimbledon Centre Court to defeat 23-time major champion Serena Williams 6-2 6-2 in 56 minutes to win her second major title.  The loss means that Serena is still stuck at 23 major singles trophies, the most in the modern era, but still 1 behind the odious Margaret Court, who won 24 (although 11 were from her home country's tournament in Australia, at a time when it is quite difficult to really consider the Australian Open a grand slam tournament). The 6-2 6-2 drubbing she received is her worst loss in  a major final (where she is now 23-9) since she lost the 2014 French Open to Garbine Muguruza by the same score. She has now lost 3 major finals in a row, to Kerber, Naomi Osaka and Halep.


WOMEN'S FINAL REVIEW
For the second year in a row, Serena lost in the Wimbledon final after making it through the draw in dramatic fashion, but without having to play a Top 10 player before the championship match. Last year she lost to Angie Kerber in straight sets and today it was Simona Halep. In both cases the reasons for these results are complex, but I feel like in today's match too many people are chalking it up to amazing play by Halep and downplaying the weaknesses that Serena revealed. It is true Halep had a mere 3 unforced errors in 2 sets today. But Serena had double that number of unforced errors in the first two games. Her serve was NOT ready to go at the beginning of the match, and after 11 minutes she was down 0-4. Both her serve and her return, two of the best parts of her game, and probably the best in women's tennis, completely disappeared. I suppose that would be enough to rattle anyone, but there were multiple times when she was in a winning position with a ball to hit out of reach that she would overhit it, trying to bludgeon it and intimidate her opponent. Instead, she hit the ball over the line. This must have happened at least a half-dozen times. Also, Serena seemed unprepared for Halep amazing defensive skills, powered by incredible anticipation and stupendous movement. Serena would hit what she thought was a winner, Halep would get it back and Serena would hit another shot that would win the point against most players, Halep would make a ridiculous get and then Serena would hit an error. I believe these mistakes were primarily caused by her lack of match play and the fact she hadn't played a top player in the tournament up to that point and she has had almost zero match play outside of the majors since she returned to competitive tennis in May 2018. She is yet to have won a title of any kind since the January 2017 Australian Open. At age 37 (38 in September) it is becoming increasingly clear she just simply can not continue to just focus on the majors, unless she finds a way to completely overhaul her mental approach to playing  a major final, which is a very unlikely prospect. I still believe (and hope) that she will win 24 (or more!) grand slam singles titles, but even if she doesn't, there's no doubt in my mind that Serena Williams should be considered the G.O.A.T.
Posted by Ron Buckmire at 7/13/2019 02:36:00 PM