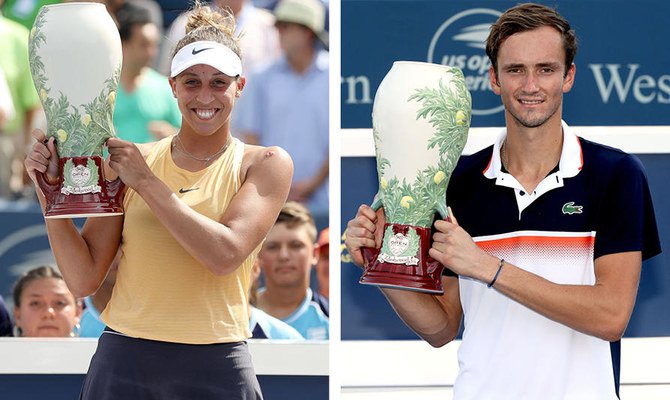 Daniil Medvedev is the hottest player in tour this summer. He made his third consecutive final in a row in the U.S. Open series (l. Nick Kyrgios in Washington, DC; l. Rafael Nadal in Montreal). He won the Cincinnati Masters title by defeating David Goffin 7-6(3) 6-4. The 6-foot-6 Russian next generation player has the most wins on tour this year (44!) and jumped from #8 to #5 in the rankings, surpassing his countryman Karen Khachanov at #9. Medvedev beat World #1 Novak Djokovic for the second time this year, coming back from a set down to win 3-6, 6-3, 6-3 in the Cincy semifinals.

Madison Keys won her biggest title of her career by beating a resurgent Sveta Kuzetsova 7-5 7-6(5) in Cincinnati. Keys victory will power her back into the Top 10 for the first time since June 2018. Kuznetsova prevented Ash Barty from resuming the World #1 ranking by beating her in the Cincy semifinals, so defending champions Naomi Osaka will be ranked #1 at the 2019 US Open when it starts next Monday. Kuznetsovam returning from injury was languishing in the low 100s and was unable to defend her 2018 Citi Open title due to visa issues. Her finals appearance will get her direct entry into the 2019 US Open with a ranking of #62.
Posted by Ron Buckmire at 8/20/2019 09:10:00 PM