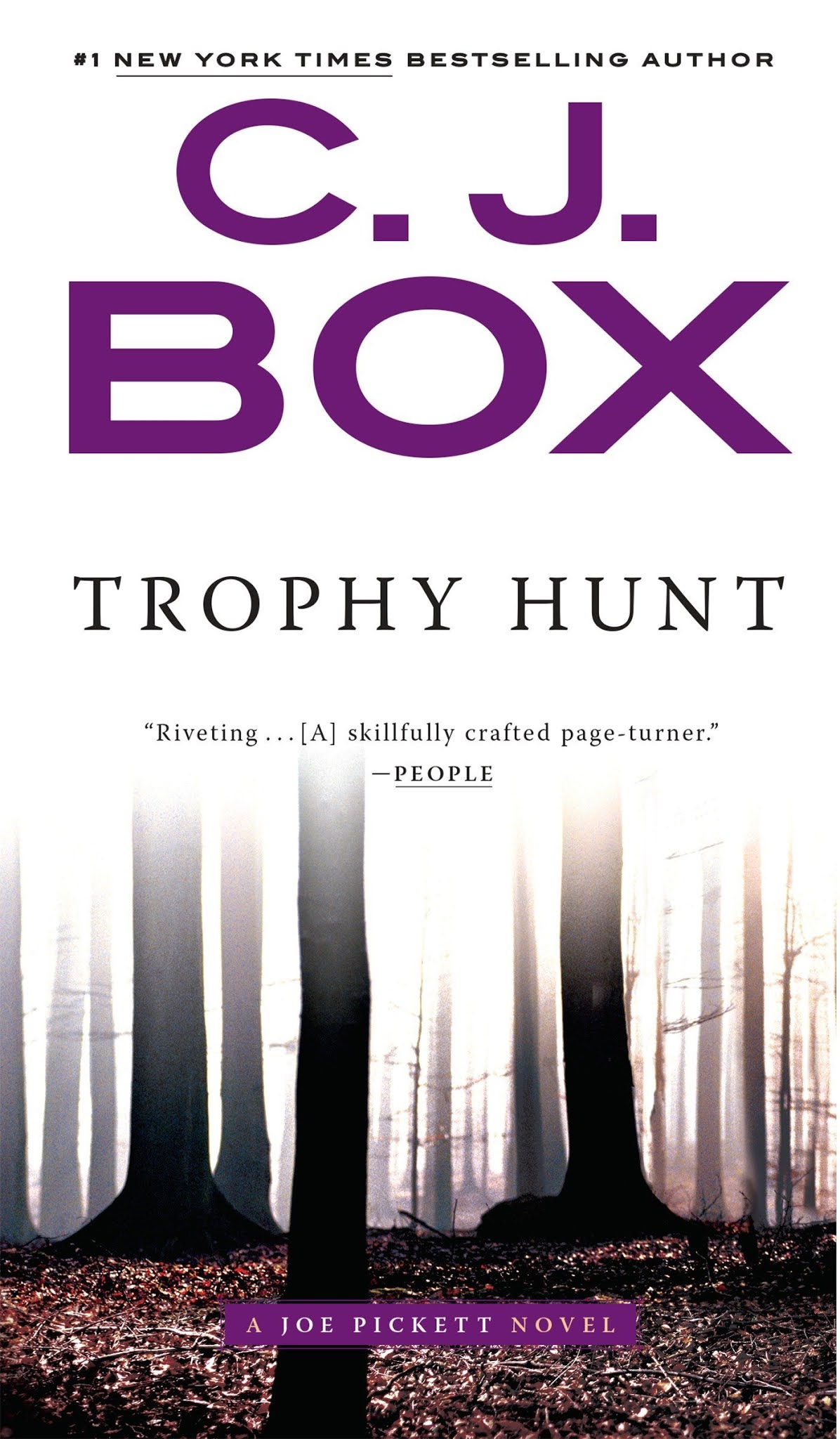 Trophy Hunt is the fourth book in the long-running, best-selling mystery series written by C.J. Box starring Joe Pickett, Wyoming Fish & Game warden and his family. These books are both similar and different from the typical books I  read in the murder-mystery, police-procedural, suspense-thriller genres. Yes, there’s usually a dead body to start the action (although in this one the first body is not human, it’s a dead moose that has been bizarrely mutilated) and the reader definitely gets a first-hand view of what Joe does to try and solve the crimes he comes across. But Joe is not a police officer, so the camaraderie with a team of detectives is missing, and the familiar details of police procedure such as forensics, canvassing the neighborhood, and trawling for leads by phone and Internet is not nearly a large feature of the Pickett books.
Instead, in Trophy Hunt (like in the earlier books) we have Joe on his own, trying to solve crimes, but this time as part of an inter-agency task force he’s been grudgingly added to (there have been multiple animal mutilations in addition to dead bodies found), while he’s being looked down upon for not being “real” law enforcement. However, instead of detective colleagues as secondary characters, Joe has his family (wife Marybeth, pre-teen daughters Sheridan and Lucy and trusted canine companion Maxine), friends (Nate Romanowski, a former Special Forces vet who now spends most of his time communing with nature, especially his falcons) and neighbors/associates who live and work in Twelve Sleep County (his nemesis, Sheriff Nate Burman; assorted other law enforcement contacts; and various colorful characters who populate the town). I have said before that a genre book centered on a main character basically succeeds on the quality and characterization of the secondary characters and in this respect the Pickett series shines. The landscape of Wyoming is an unusual but evocative setting for the mystery series and Box uses it often for maximum effect.In Trophy Hunt, the mystery revolves around money, real estate and family. Amazingly, the area around Twelve Sleep is beginning to boom due to the presence of rich pockets of natural gas. This is resulting in a real estate boom and potential huge profits. Of course where there’s money to be made there’s criminals ready to do whatever it takes to get it. It takes awhile for Joe to figure out what’s going on. (This is a repeated theme of the series. Joe is a cloistered, solitary figure without much worldly exposure. But his lack of knowledge about something or inexperience doesn’t stop him from trying to find out the truth if he thinks something bad or criminal is going on, and that’s fun to watch.) Mary Beth actually plays a significant role here, because she has started working as an accountant for a real estate firm. She is really the brains of the couple and they both are growing more concerned about their finances as the girls grow older and Joe’s meager state salary becomes increasingly insufficient.

Overall, Trophy Hunt is another engaging and exciting entry into the Joe Pickett series. After four books, there’s a familiar rhythm to these books (which is another appealing element of most genre series) and that’s not a bad thing. If you liked any of the first three books you’ll like this one. Another (slightly unusual) feature of the Pickett books is that they are not strongly sequential, so one could read them out of order if you wanted to. This is an impressive authorial feat by Box. I am definitely going to read them in sequential order, because one can follow the characters change and grow, which provides an extra element of enjoyment to these already quite enjoyable books.!