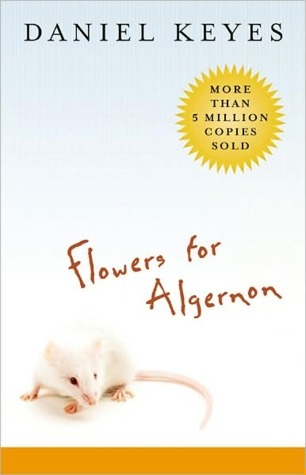 Flowers for Algernon is a classic work of science fiction written by Daniel Keyes published originally as a short story in 1958 and a novel in 1966 that was adapted into the award-winning 1968 movie Charly starring Cliff Robertson. Both the book and the movie are known as tearjerkers because of the sympathetic nature of the depiction of the main character, Charlie Gordon, who is a mentally challenged 32-year-old man (with an IQ of 68) who participates in a radical experiment that results in a large and rapid, but temporary, increase in Charlie’s intelligence. The titular character of Algernon is a laboratory rat who undergoes the experimental treatment first and who Charlie closely identifies with, especially since he eventually realizes that the trajectory of his intellectual life is going to follow Algernon’s.The story in Flowers for Algernon is told as a series of vignettes, described as progress reports written by Charlie. Keyes cleverly uses the text of the reports (grammar, word choice, spelling) to demonstrate to the reader how Charlie’s intelligence changes as the book progresses. In the early parts of the book, the reports are riddled with errors and have a very simplistic voice, reflecting Charlie’s diffident and oblivious personality. After the procedure, as Charlie’s IQ soars by over 100 points, the writing in the progress reports becomes more sophisticated and the voice is more confident as Charlie begins to understand the world around him.Although many things change as Charlie’s status changes from dunce to genius, some things remain the same. In the beginning, Charlie clearly has difficulty determining the motives of people and is easily tricked. In some sense, ignorance is bliss; he thinks his coworkers at the bakery he does deliveries for are his friends, when really they play cruel tricks on him that he doesn’t even understand are happening. After the experiment, Charlie still misinterprets (or imposes his own interpretation for) the reasons Dr. Jason Strauss and Professor Harold Neymar are pursuing this research. Charlie has feelings for Alice Kinnian, his teacher at the Beekman Center for Retarded Adults, before and after the procedure. In both phases he doesn’t know how to articulate or express his views to her. When he becomes “smart” he doesn’t realize that his intelligence is intimidating Alice and he’s unaware of how self-centered his behavior around her is. Despite this, she still agrees to a romantic relationship with him but he’s unable to go through with it.One of the more interesting aspects of Flowers for Algernon is it’s setting in New York in the early 1960s. The reader gets to see a slice of how New Yorkers lived at the time. Keyes also depicts the conservative social mores of the time in Charlie’s social interactions between many of the important people in his life, such as his employer, Mr. Donner (the bakery owner); Alice Kinnian, his teacher and love interest; Fay Lillman, his neighbor, friend and eventual lover.Overall, Flowers for Algernon is a tragedy and a cautionary tale whose moral is “be careful what you wish for.” In the beginning, Charlie most heartfelt wish is “to become smart” because he think it would repair the relationship between himself and his mother, who abandoned him to the Beekman Center once his younger sister grows old enough to be jealous of (and shamed by) a big brother who is older in age but younger in intellectual development. He also has absorbed the societal value that “smarter is better” and thus wants to be smarter and better. But as Charlie’s intellectual prowess grows he becomes more and more obnoxious to be around and his interpersonal relationships all suffer. His conceptual capacity grows enormously (he can read and speak multiple languages and he understands at expert levels many different unrelated subjects) his emotional capacity seems to diminish. He’s contemptuous of college professors (and students) for their interest in (and inability to focus on more than) one intellectual discipline at a time. Eventually he breaks with the people who conducted the experiment, annoyed by their treatment of him as a source of study instead of as a contributing partner. The tragedy is that it’s Charlie himself who figures out that the extraordinary increase in intelligence is actually temporary and that he will eventually lose all the gains and be back where he started from. That he knows it’s going to happen and that it does is absolutely devastating for the reader to watch. All of the milestones he achieved as a result of the experiment: writing fluent and correct prose in the progress reports, leaving his menial job at the bakery and living independently all get reversed as the story continues. And Flowers for Algernon ends with Charlie not really remembering who Algernon was, but that he was a good friend of his who he wants to honor, so he asks his friends to remember to put flowers on Algernon’s grave after Charlie is committed to a state home for the mentally incapacitated.