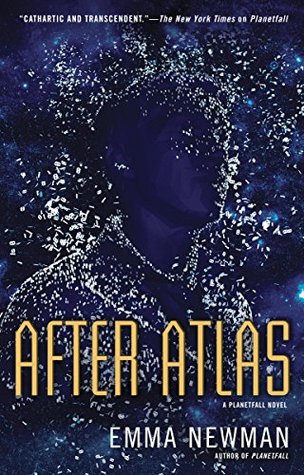 I have not read any books by Emma Newman before and I usually make a habit of reading the books in a series in story order but After Atlas is the second book in Newman’s 4-part Planetfall series. However, there are multiple reasons why I decided to begin with After Atlas: it’s got the highest average rating of the four Planetfall books (4.18 on a 5.0 scale), the author says that the books can be read in any order, and, most importantly, it’s a rare mystery-science fiction genre hybrid.

After Atlas is about a homicide detective named Carlos Moreno who is asked to investigate the mysterious and gruesome death of Alejandro Casales, the leader of a religious cult known as The Circle based in Texas. Moreno left The Circle at the age of 16 and his father is still a member of the organization. Forty years before the events of After Atlas, Moreno’s mother famously abandoned her family soon after Carlos was born. She left Earth as part of the original Atlas mission in which 1,000 of the planet’s most accomplished scientists and engineers created and successfully launched a spaceship at the behest of another cult leader known as The Pathfinder who claimed that she had been told the galactic coordinates of where to find God.

In the intervening years since he left the Circle, Moreno has had no contact with Casales or his father, for multiple reasons, but also because The Circle has a strong anti-technological philosophy towards the near-ubiquitous brain-embedded chips that have facilitated the underpinnings of modern society. Primary among these is the use of APAs, or Automated Personal Assistants (basically like a souped-up version of Siri powered with artificial intelligence and direct access to monitor all your bodily functions).

One of the most interesting aspects of After Atlas is its depiction of the world in which the police procedural story takes place. It's basically a corporate dystopia where capitalism has run amok. There are no more independent nations, there are “gov-corps”--basically mergers of corporations and governments. Casales death happened in a fancy hotel in London in what is now known as Norope (i.e., Northern Europe). Because Casales was an American citizen who died in Norope there was a diplomatic standoff which was broken when the parties agreed to let Moreno (with his known previous ties to the Circle and knowledge of Casales) conduct the investigation into the suspicious death. We get to see how Moreno, who it turns out is basically an indentured servant to the Ministry of Justice due to the way he was exploited as a teenager soon after he escaped the Circle, conducts the investigation with all sorts of cool technological tools at his disposal: 4-D virtual reality walkthroughs of the crime scene captured by insect-sized drones, use of APA-enhanced senses during interrogation of witnesses, and access to vast amounts of surveillance data due to the universality of embedded-chips among the general public.

Another interesting aspect of After Atlas is the broad spectrum diversity of the characters. One of the key villains is a billionaire who has a beautiful trophy husband, and a non-binary person (referred to as a “neuter” using ze/hir pronouns) plays an important role in the plot. Clearly the main character has a Latino name and the author goes out of her way to often describe the physical appearance of minor characters to let the reader know that they represent different races and ethnicities.

The story in  After Atlas is an excellent blend of murder mystery and science fiction which is all too rarely done well. By the end we do find out “who did it” but like all good mysteries, the other aspects of the story are equally, if not more, interesting. In this case, Moreno's success at following the threads of the investigation leads to the discovery of corruption and crimes on a global scale and has a profound impact on the character’s future. This leads to quite a dramatic ending of the novel that has an indelible impact on the world we had been introduced to during the course of the novel.