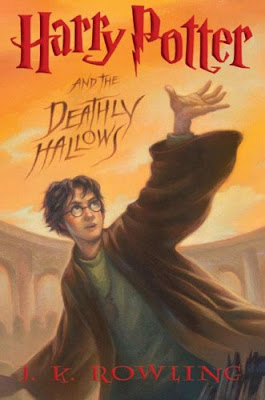 My copy of Harry Potter and the Deathly Hallows was on the stoop whenthe other half woke up late Saturday morning (Mad Professah was up early in order to atend an all day board meeting for Center for Health Justice) but I didn't start reading the seventh and final book in the best-selling Harry Potter series until late Saturday evening.

Although I saw that the New York Times reviewed the seventh book two days before it was publicly released at 12:01 am on Saturday morning (Friday night) it wasn't until I saw the headline of the Los Angeles Times review "Harry Potter comes to a magical end" that I really started to worry that J.K. Rowling would really have the audacity to kill off her main character.

I don't want to ruin it for people who have not read the book yet but I will say that readers will be both pleased and saddened by the ending, and the book will make a heckuva movie! The reader will be impressed by the intricate plotting of the seventh book which ties together threads and clues which have been sprinkled throughout the first six books. Rowling's characterization of the relationship between the three friends Harry, Hermione and Ron is complex and compelling. For the first time, Rowling does not have the structure of the Hogwarts school year around which to mould her story, but in my opinion there is no diminution of emotional connection with the characters. The only slightly iff-tune aspect of the book is the monotonous portrayal of the Harry's adoptive (and abusive) Muggle family, the Dursleys. The political implications of the book, first initiated in Order of the Phoenix are continued in Deathly Hallows, and intensified to momentous effect.

It is true that at least two major characters are killed off in the Deathly Hallows, as well as all questions about the nature of Severus Snape and Album Dumbledore are answered. This and other aspects of this suspenseful conclusion to one of the great master works of modern popular fiction make the Deathly Hallows the best book in the series and a thoroughly enjoyable experience.

Who decides which books get press (Harry Potter) and which get censored? After all, censorship is becoming America's favorite past-time. The US gov't (and their corporate friends), already detain protesters, ban books like "America Deceived" from Amazon and Wikipedia, shut down Imus and fire 21-year tenured, BYU physics professor Steven Jones because he proved explosives, thermite in particular, took down the WTC buildings. Free Speech forever (especially for books).
Last link (before Google Books caves to pressure and drops the title):
America Deceived (Book)