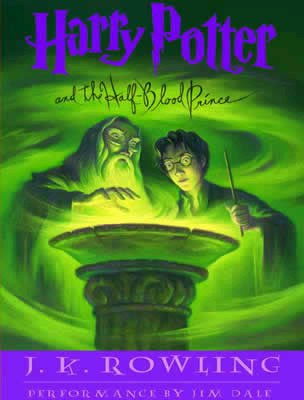 The only thing I still remembered from my first reading of Book 6 in 2005 was the obvious "Dumbledore Dies!" but there is much more to the story than that earth shattering event. The sixth installment of the Harry Potter series has even more teen angst than the hormone-soaked fifth installment, Harry Potter and the Order of the Phoenix.

This time, though, the teenaged trio does have serious things to worry about, like the results of important exams (O.W.L.s, which is a clever play on the British 'O' level exams which Mad Professah himself took when he lived in a Commonwealth country in the mid-1980s and in the British system of education are extremely important in determining one's future educational career path).

The most interesting aspect Half-Blood Prince is the story-within-a-story we get of the life of Tom Riddle (Lord Voldemort, to you!) told via memory retrieved through a magical device called a pensieve. It is extremely impressive that Rowling devotes so much of her narrative to providing a well-fleshed out back story for the series villain, a process she repeats in the last book with Severus Snape, and to a lesser extent, Draco Malfoy. In her world, although there is definitely good and evil, there are also shades of gray (or grey) and she makes use of the entire color palette as she paints a compelling picture of Harry Potter's maturation to adulthood in the latter books of this must-read heptology.