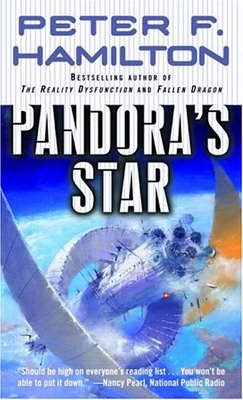 Peter F. Hamilton is the best-selling "speculative fiction" author of the acclaimed (and intricate) Night's Dawn trilogy. I have read that series twice (which is no mean feat because the entire thing consists of three 1000-plus page books: The Reality Dysfunction, The Neutronium Alchemist, The Naked God) and have been looking forward to reading more work from this incredible author. I came across Pandora's Star and read it on my trip to Puerto Rico in May 2007. As usual with Hamilton, the novel has been enthusiastically reviewed.

I agree, generally, with the enthusiasm for (and Pandora's Star and Judas Unchained). Hamilton has again created a densely populated universe, filled with well-sketched characters and fascinating technology. I recently re-read these two sprawling novels in The Commonwealth Universe in anticipation of Hamilton's next work, The Void Trilogy, which is set 1200 years in the future of the same Universe.

Pandora's Star is a perfect example of this genre, but Hamilton manages to incorporate many tropes from science fiction: First Contact, Alien Invasion, Paradigm-Shifting Scientific Discovery. For good measure, Hamilton incorporates ideas from other genres as well. There are significant murder-mystery and conspiracy sub-plots. The entire story is peppered with sociological commentary on our contemporary world (as most excellent works of art are).

Pandora's Star is an excellent example of the science fiction genre, but also an incredibly enjoyable (and extensive) read.