REVIEW: The Emperor of Ocean Park 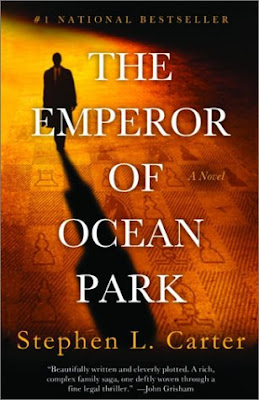 I read The Emperor of Ocean Park by Stephen L. Carter a few years ago in hardback and in eager anticipation of his second book, New England White, I
re-read it in paperback over the summer. I would preface my review by saying that I am an avid fan of the mystery genre (I'm currently working my way through Ian Rankin's brilliant Inspector Rebus series) as well as a former international chess player and avid Supreme Court watcher. These interests are clearly shared by Carter, who when he is not writing mystery novels is Professor of Law at Yale Law School, which is probably the best law school in the country.


Interestingly, the main character in The Emperor of Ocean Park happens to teach at a prominent law school on the Eastern Seaboard. The character's name is Talcott Garland, whose father Judge Oliver Garland was an unsuccessful conservative nominee to the United Supreme Court and whose wife is in the running for a judgeship on the United States Court of Appeals.

When his father dies unexpectedly, Talcott risks his marriage, his career and possibly his own life in order to uncover the secrets unearthed by his father's untimely death.

The book is an engrossing but somewhat phlegmatic read, due to its length (over 650 pages) and subject matter. I look forward to reading Carter's New England White, and I hope that he doesn't take another five years to write his next mystery novel.

Hi, this is not so related to your page, but it is the site you asked me 1 month ago about the abs diet. I tried it, worked well. Well here is the site