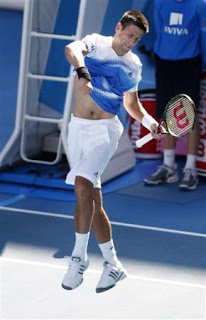 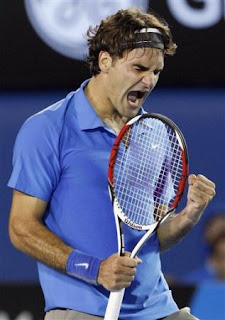 This mouthwatering match is a reprise of the 2007 U.S. Open final which somehow Federer won in straight sets despite being outplayed by the Serbian youngster for the first two. I predicted that David Ferrer would continue his scintillating play from the end of last year and stop Djokovic, whose personality and demeanor I'm not a fan of, but whose games never fails to impress. Instead, Djokovic stuffed a pastele in the mouth of Ferrer and dispatched him in straight sets 6-0, 6-3, 7-5. Much has been made of Federer's near-death experience with a far less heralded Serbian player Janko Tipsarevic who, on a Federer off-night, took Federer to 5 sets and nearly sent him packing from the tournament in the 3rd round. However, Federer is well aware that Djokovic is his heir apparent and looks forward to the task of demonstrating that "he's not dead, yet." After a comfortable evening workout of excellent tennis against his personal manservant James Blake where the Swiss World #1 improved his career lifetime record over the American to 8-0 and insured he would reach his record 15th conscutive Grand Slam semifinal and 209th consecutive week at #1. It's true that the only time Federer has lost in Melbourne in the last 5 years was in the 2005 semifinals to Marat Safin--and he was up match point and lost in 5 sets. I suspect Federer will want to send a distinct message to Novak and the rest of the young guns and raise his intensity a notch. Djokovic has not lost a set in his path to the semifinals and if he can find another gear he may be able to show Federer that youth is always served, in the end. PREDICTION: Federer, in four sets. 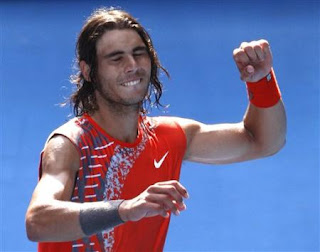 Jo-Wilfried Tsonga FRA vs. Rafael Nadal ESP (2). Tsonga is the great story of the 2008 Australian Open. He is an unseeded player who has made it as far as the final 4 players and is within one match of a historic Grand Slam final. Just by being in the semi-final, Tsonga makes history as the first Black male player to be in the semi-final of a major since American MaliVai Washington did it at Wimbledon in 1996. 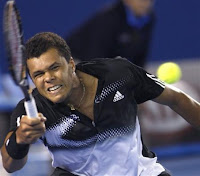 Tsonga dispatched the very hot (in multiple senses of the word) Mikhail Youzhny in straight sets in the quarterfinals while Nadal took out fellow leftie Jarkki Nieminen pretty easily. The two have played each other only once (fairly recently) in the 3rd round of the 2007 US Open, and Nadal won fairly easily 7-6(3) 6-2 6-1. Since Tsonga was not overwhelmed by making his first Grand Slam quarterfinal somehow I don't think he'll be overwhelmed by his first major semi and so the match may be decided by what happens on court instead of what's happening inside smoeone's head. This is a good thing. Does Tsonga have the game to defeat Nadal? Definitely. Will he? It's doubtful. All the intangibles go the Spaniard's way. Nadal usually has a problem with people who hit very flat, very hard, limited spin strokes on both wings, like a Blake, a Youzhny or last year's finalist Fernando Gonzalez. PREDICTION: Nadal, in five sets.
Posted by Ron Buckmire at 1/23/2008 06:22:00 PM