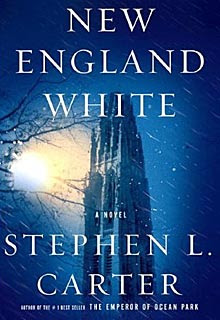 Stephen L. Carter's New England White is the sequel to his The Emperor of Ocean Park (see MadProfessah's review), which was a delightfully amusing and densely plotted murder mystery containing trenchant social commentary on academia, race, law and political correctness.

Since New England White is his second novel and is centered around a minor character from his first it is immediately at some disadvantages. First, the writing style and milieu in this novel is no longer new to the reader since we've seen this intimate, insider's view of academic society and the black bourgeoisie (dubbed "The Darker Nation" by Carter) in Emperor of Ocean Park.

But, instead of the central character of the book being a Black law professor at an elite New England law school (*cough* Yale *cough*) Carter has switched the focus to the wife (Julia Carlyle) of one of the other Black law professors in the first book who in the interim has now become not only a federal Judge but White House counsel and President of said elite University!

So Carter's second book is both comfortingly familiar and disappointingly unfamiliar simultaneously. Darn it, we liked Tal Garland from the first book and he barely has a cameo in this book, though his wife and child do appear repeatedly.

What Carter does do well in New England White is pose increasingly significant puzzles on the way to revealing the contours of a central mystery which involves a death. The format is a good one and his insight into the setting of his story and the sociopolitical commentary (albeit in a fictional context) is amusing and engaging.

The main (and nearly fatal) flaw of the book is the ending. In particular, the last 50 pages and the denouement of the plot include scenes which attempt to be suspenseful but in reality strain credulity and significantly weaken the overall impact of the novel.

Regardless, Professor Carter has found a very enjoyable (and lucrative) niche in the publishing world. I hope that he is able to produce another novel in this vein, although I would recommend he base the third book about Kimmer Garland, the character in common to the main characters of his first two books.