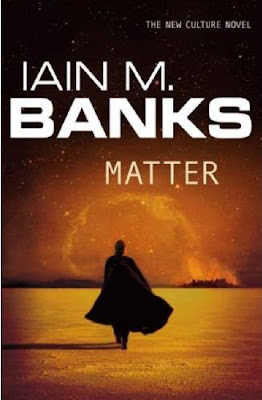 Iain M. Banks has been on my list of science fiction authors to try for quite awhile since his name is often mentioned in the same breath as my favorite, British master of space opera Peter F. Hamilton.

I actually tried to read Banks a few years ago when his The Algebraist came out. It got excellent reviews and was nominated for big awards soI picked it up from the library and hated it. I didn't even bother to wrie up a review. In fact, I'm not even sure I finished it, but I am pretty sure I did. All Banks novels are intricately plotted with multiple threads and characters leavened with wry humor but for some reason The Algebraist just didn't work for me.

Happily, Matter, which is one of the books in the series Banks is most well-known for (The Culture series) is very different from The Algebraist although on the surface their descriptions seem somewhat similar.

Both books feature a sophisticated, galaxy-spanning society which has an intricate, hierarchical culture and a story that centers around a single key individual. In The Algebraist this person is the annoying Fassin Taak, while in Matter this person is Prince Ferbin.

Most reviews of Matter talk about its overwhelming length (600+ pages) but for someone who is a Peter F. Hamilton fan this is really not an obstacle to enjoying the book, since we are accustomed to the 1000+ page-turners Pandora's Star and Judas Unchained.

Iain M. Banks' work is reminiscent of Hamilton, with a similarly complicated plot and overly detailed combat scenes. However, Banks also includes a wickedly sharp sense of humor that he deploys to great effect as he simultaneously creates and pokes fun at typical space opera tropes such as advanced weapons technology, super-smart computers, humongous artificial living environments and bizarre aliens.

Reading Matter has convinced me to try and read the earlier works in the Culture series, like Excession (1998) and Look to Windward (2001), the immediate prequel to Matter.

Note, I tried to read Excession and Use of Weapons and although I finished the former I could not complete the latter and was very unimpressed and unhappy about the whole thing.