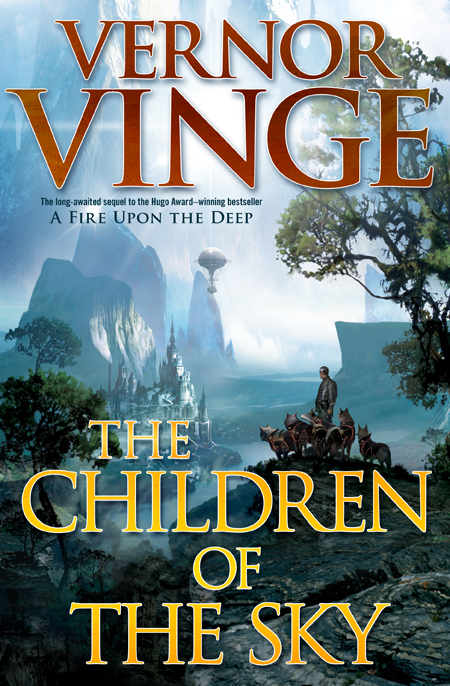 Two of the best science fiction books of the last few decades were written by Vernor Vinge. These are the classic titles A Fire Upon The Deep and A Deepness in the Sky (see MadProfessah reviews by clicking on the links.) These books were published in 1992 and 2000, respectively and are now generally described as being part of the Zones of Thought series. They both won the Hugo Award for Best Novel in the year of their release. Now, nearly 20 years after the first book in the series, Vinge has published a sequel called  The Children of the Sky set in the exact same setting as A Fire Upon The Deep, with several of the characters from the earlier books returning, albeit in a time which is 10 years past the events in the first book.

Most fans are usually disappointed when a long-awaited sequel to a beloved book is finally produced. The reasons for this are unsurprising; in the intervening years both the audience and the author have both aged and changed and thus it is very difficult to recapture that spark which inflamed readers the first time. Happily, in the case of The Children of the Sky, Vinge is able to seemlessly drop us right back into the world he created with A Fire Upon the Deep decades before as if only a few moments had passed by.

The basics of the story are that a horrible disaster has befallen civilization. In Vinge's Universe there are Zones of space in which different levels of technology are possible. There is the Slow Zone, where faster-than-light speed is not possible due to the limitations on computational complexity and speeds, the Beyond in which FTL travel and communication is possible and the Transcend where the beings are so advanced they are for all intents and purposes Gods. These Zones of Thought are not sharp delineations and there is some variation even among the Zones. For example it's possible (and devastating) for planets to slip from one zone to the other, causing functional technological levels to vary by thousands of years of development in just a few seconds. In A Fire Upon The Deep a long-dormant evil intelligence (known as The Blight) is awakened in the Beyond and begins to cause unimaginable havoc to the civilized species who inhabit the Zone, resulting in the deaths of billions. A space ship carrying a few hundred children in "sleepboxes" (suspended animation) crashes on a planet and that story revolved around how the brother and sister Jefri and Johanna Olsndot survive their first contact with the intelligent species which inhabit the planet, called Tines World. The Olsndot siblings' parents were part of the scientific team that discovered and accidentally released The Blight into the Beyond. The Tines are 4-legged furry animals resembling dogs who communicate telepathically and through subsonic signals and when spatially close in groups of four or more form a group intelligence equivalent to humans. The Tines have a basic medieval form of society when suddenly they are exposed to the existence of modern technology from The Beyond. Additionally, a space ship (called Out of Band) from the Beyond lands on Tines World in order to rescue the children and get information on where the Blight came from in order to protect and save the rest of civilization from its devastating effects.

In The Children of the Sky, Tines World is now firmly in the Slow Zone and ten years have passed since the events of the A Fire Upon The Deep and most of the children who were in coldsleep have been awakened and are starting to form a society with the realization they may never get back to The Beyond and ever experience those familiar technologies again. One of the fascinating aspects of A Fire Upon The Deep (and A Deepness in the Sky) is the incredibly detailed and complex society that Vinge is able to produce, in a completely alien context. Here we have humans interacting with dog-like hive minds and the characters are drawn with such fully realized motivations and emotions that you are forced to empathise with them. Another feature of Vinge's writing is the ambiguity of his characters, especially his villains. In A Fire Upon The Deep it is not very easy to distinguish who the "good guys" are from the "bad guys" and it is a central tension of the book, which returns in the sequel Children of the Sky that just because we are getting a first-person perspective on events from a particular character does not necessarily mean that that character is a force for "good."  In fact, central to Children of the Sky is who gets to decide what is "good" or the best course of action for a group of people? How are those decisions made? There are (at least) two main factions and they both feel they are doing the correct thing for the Children and Tines World as a whole. Eventually it becomes clear that one faction is willing to commit horrific crimes (of violence, kidnapping and murder) to achieve its ends and so the reader (or at least This Reader) made a choice as to which faction to support. Then the tension is will the good guys win or will the bad guys win? This is quite a suspenseful question which basically kept me up reading until 5am to finish the book, and by the end several questions (but notably not all of them) are answered, which leads most observers and reviewers to think that there will probably be a sequel (or sequels) forthcoming.

Hopefully, it won't take another 20 years for Vernor Vinge to write it!