BOOK REVIEW: The Best of All Possible Worlds by Karen Lord 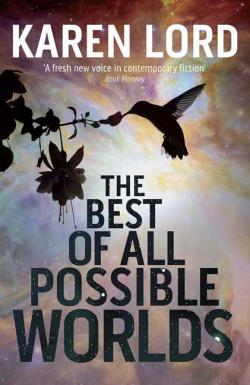 You know that feeling when you read a work written by someone you really like? How you also want to like their work? That's how I felt when I picked up The Best of All Possible Worlds by Karen Lord. I met Ms. Lord personally 6 days before writing this, and before reading the book. Our 5-hour conversation (in the company of the Mad Professah himself while on vacation in Barbados) had braced me  like a tall glass of ice-cold water with drops of cool condensation on the sides—I was utterly charmed. So I am more than happy to report that I enjoyed the book (TBOAPW) purely on its own terms.

This is speculative fiction and Ms. Lord is a West Indies author. Moreover, she doesn't shrink from the notion that TBOAPW is Caribbean speculative fiction. My experience is short in this area, so first I'll remark that the dialogue and prose all sounded natural to my North America–tuned ear. The differences between this and, say, Ray Bradbury are more subtle than written-out dialect, which this book does not use. Regardless of any regional differences, the book propelled this reader effortlessly from page to page and chapter to chapter. I found myself re-reading certain sections only to be sure I didn't miss a thing.

In fact, the language differences between the characters are as notable as the distance between usage in TBOAPW and, say, Ursula K. LeGuin or Octavia Butler. Chapters written from the point of view of Dllenahkh, the male protagonist, are written in the third person in an elevated, learned style close to the character of Dllenahkh himself. Chapters from the point of view of Grace Delarua, the female protagonist and primary focus, are in first person and a much more casual style, sometimes even pleading with readers for patience or indulgence and addressing us as "you" (as though the novel is the very memoir we see Delarua writing in the last scene).

The book reveals its West Indies bloodline just as brightly in its physical descriptions and themes, with undercurrents of race and colonialism running very near the surface. The Sadiri, putative superior race (at least they seem to think so), fit the book's galactic human norm with "eyes, hair, and skin all somewhere on the spectrum of brown," but they also boast iridescent hair and mental abilities which set them apart. Before we reach the end the book exposes, pricks, and ultimately deflates the "superiority" of the Sadiri in spite of their position of privilege. Even the Caretakers, a shadowy race with near-godlike powers, reveal themselves near the end to be advanced humans from the future rather than angels or demons. (I think.)


In broadest outline the book is a tour of cultures (think Gulliver's Travels in a universe by Frank Herbert) powered by two big plot engines: Pushing us forward from the front of the book is a planetwide tragedy which may turn out to be genocide—or at least grossly negligent slaughter. Pulling us onward toward the back of the book is the unfolding of a cross-culture, May-September romance. Our energetic, first-person heroine Delarua eventually finds love with the more mature (previously married) third-person hero Dllenahkh. In spite of the baggage that comes from emotional abuse (Delarua's) or infidelity and loss (Dllenahkh's), the wheels of love turn slowly but still sure.

Where does this book fit in the classic SF tradition? For me, this book has some of the humanist touch of Ray Bradbury, perhaps without the same suspicion of technology. It probes the intersection of personal life and politics or careers in a way which reminded me of Ursula K. LeGuin. It draws vivid pictures of human cultures with features both foreign and familiar—this reminded me of Frank Herbert, albeit sketched more briefly and with fewer brushstrokes. Speaking of few brushstrokes, it hits its marks with the bracing leanness of the best of Arthur C. Clarke, though Lord's characters are fuller and more personable. Finally, the book takes on social structures, gender, and even super races, attracting comparison with another of my favorites, Octavia Butler.

As in all the best SF, the social commentary here takes a back seat to the personalities and the vivid scenes they inhabit. In The Best of All Possible Worlds, readers of Ray Bradbury, Ursula LeGuin, and Octavia Butler can expect to be drawn into a fast-moving story: eye-catching scenery, likeable characters, engrossing questions, and satisfying—if open-ended—conclusions.
Posted by Sentient Meat at 6/06/2013 12:07:00 AM