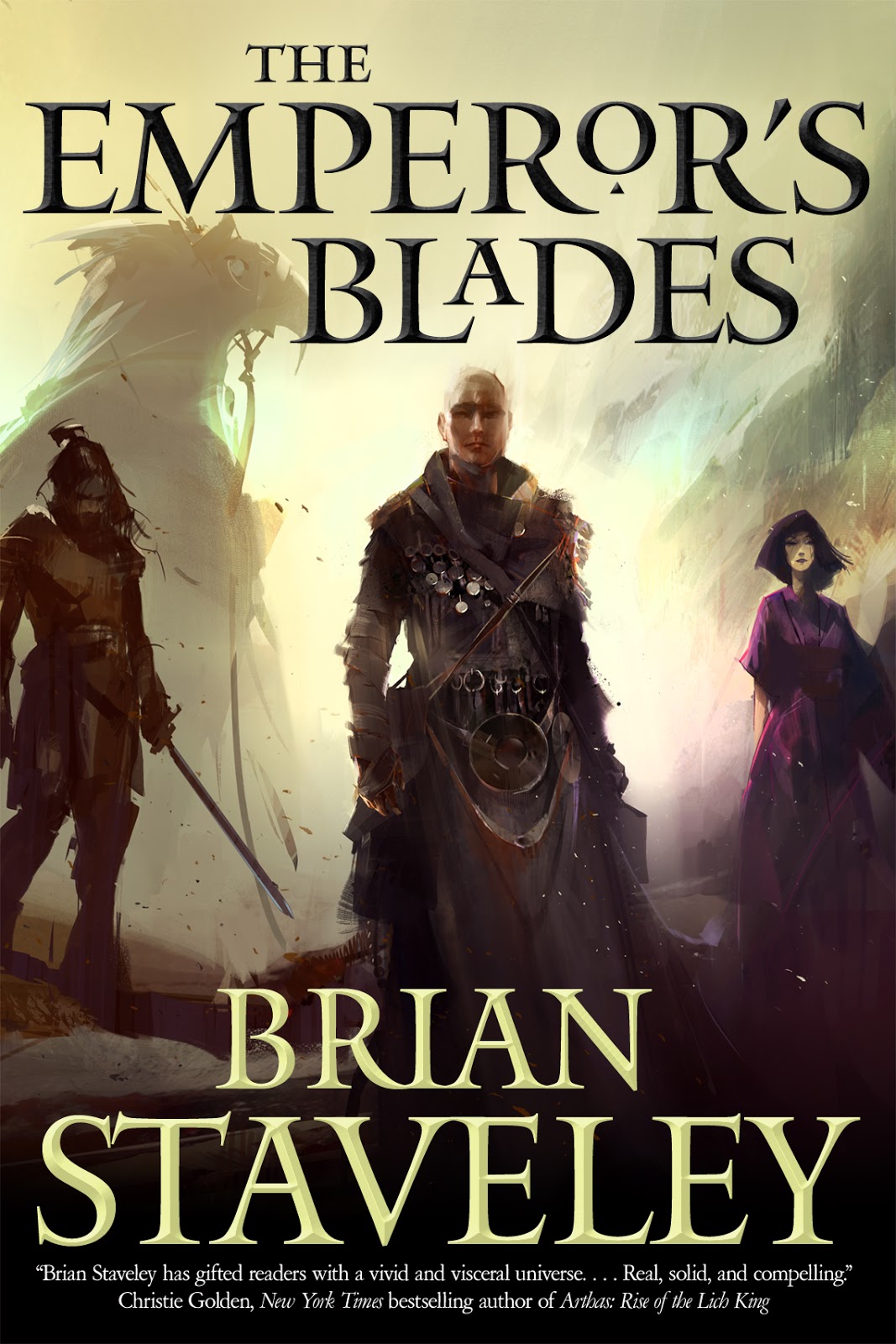 I have been hearing about the Chronicle of the Unhewn Throne series by Brian Staveley for quite awhile. Amazon.com has been suggesting Staveley's books to me because I have either bought books by Brent Weeks (The Lightbringer Series) and Daniel Abraham (The Dagger and the Coin series). I read some reviews on Goodreads and requested the first two books from the Glendale-Pasadena library system. I'm very glad that I did! These books excellent works of fantasy, in the classic tradition of my favorite authors like George R.R. Martin, Peter Brett and Scott Lynch.

A new name can be added to this list: Brian Staveley. His debut novel is The Emperor's Blades, which won the 2014 Gemmell Morningstar Award for Best Debut Fantasy Novel. Happily this award-winning 2014 release is the first book in a trilogy with the second book, The Providence of Fire published in 2015 and the third and final book, The Last Mortal Bond, set to appear in March 2016. Together these three titles form what is known as The Chronicle of the Unhewn Throne.

The Unhewn Throne is the symbol of the Emperor's power in Annur.At the beginning of the first book, Emperor Sanlitun is dead, murdered by forces unknown. His three children are Adare, the eldest child, a daughter; Kaden, the Emperor's heir; and Valyn, the youngest son. Adare is in the capitol city, surrounded by both enemies and allies, where one of her father's posthumous acts has been to appoint her to be Minster of Finance. She has not seen her two younger brothers for years. At a tender age, Kaden was sent far, far away to train with the monks of the Blank God in the distant Bone Mountains at the very edge of the Annurian empire. Valyn has gone to the Qirin Islands to try out to survive the deadly training regime to become a Kettral, one of the elite forces who ride giant birds in service of the Emperor.

The Emperor's Blades is primarily a story about what happens to Kaden and Valyn as the ramifications of the assassination of their father the Emperor are revealed it becomes clearer that he was probably not the only member of  the royal family targeted for death. But even more intriguing is that who ultimately sits on the Unhewn Throne controlling Annur may not be the most important fact that needs to be determined.

Staveley does an excellent job of making the reader want to care about all of Sanlitun's children. (One of the main criticisms of The Emperor's Blades that one often sees is that Adare's story is not as interesting or important to the plot in the first book. This is true, but this is a somewhat minor quibble and is more than balanced by how compelling both Valyn's and Kaden's stories are. I do like Adare's character and wish there was more of her in the first book. Happily, she plays a much larger role in the sequel, The Providence of Fire. In addition to Kaden, Valyn and Adare, the other characters are also well-drawn and I was genuinely moved when really bad things happened to some of these characters who I had started to care about. The stakes are high, people! This is epic fantasy at its best.