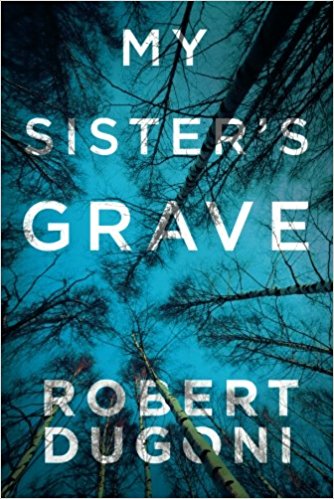 This is the first book by Robert Dugoni I have read and I’m rather impressed. My Sister's Grave is an unusual murder-mystery where the victim has been missing and presumed dead for 20 years and was the sister of the female protagonist searching for the kidnapper/killer. The book is a curious melange of genre elements, with plenty of dangerous action, intense courtroom scenes, a dash of romance and a large dollop of suspense. OVERALL: 4 STARS.

Tracy Crosswhite has not seen her teenaged sister Sarah for 20 years, after she left Sarah to drive herself home alone in Tracy's truck to their small rural Washington hometown of Cedar Grove, WA. The two parted ways after Sarah let Tracy win first place in a statewide shooting contest in Olympia and Tracy went off in to eat dinner with her boyfriend (who Sarah knew was going to propose to Tracy). The next day Tracy’s nightmare begins with the disappearance of her sister, and continues for nearly 20 years until the events  at the very beginning of the book depicting Sarah’s skeleton being discovered and unearthed.

The main source of narrative energy in My Sister's Grave is the emotion of regret and guilt animating Tracy, now a Seattle homicide detective, as she continues her decades-long effort to find out what happened to her sister, disbelieving the official story that the person who was tried and convicted for the crime actually did it. This is a great plot and the story is compelling but I wonder how Dugoni will sustain the narrative tension in future Tracy Crosswhite books once the mystery of Sarah’s disappearance and death is resolved in this first book? Regardless, in My Sister's Grave Dugoni skillfully builds up the tension and suspense as more and more details about the past events are revealed (often in chapters with flashback scenes to events just before and after Sarah;s disappearance).

By the end all questions are answered and the mystery is solved. Overall, I would say I’m quite interested in reading more books with Detective Tracy Crosswhite (I bought the next two sequels Her Final Breath and In The Clearing for $1.99 each on Amazon Kindle!) I’m a little worried that the secondary characters were not very well developed to provide future hooks into the upcoming stories which feature Tracy as the lead character but since all the books have relatively high ratings on Goodreads I’m guessing Dugoni figures out a way to maintain the high level of quality demonstrated in My Sister's Grave.