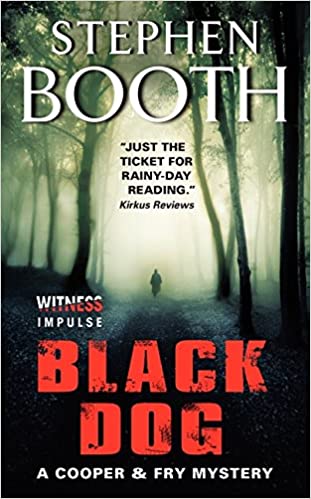 Black Dog is the first book in a series of British police procedural, crime thrillers written by Stephen Booth starring Ben Cooper and Diane Fry, set in the Peak District of Northern England near Manchester. Generally referred to as the Cooper & Fry series, I discovered the book as it was recommended to me by the website FantasticFiction, for readers who also like Stuart MacBride and Val McDermid (which I definitely do).

The British police procedural, crime thriller is a (very) well-populated genre I am discovering. So my tastes have become more discerning as I read more of them. I have read all of Ian Rankin's work, as well as the mysteries written by Peter Robinson, Tana French, and Agatha Christie. I've come to realize that, generally, I prefer books that feature at least one female protagonist (or are written by a female author). I think it’s probably as a gay Black male I don’t really connect with seeing toxic masculinity in my fiction and I prefer to read stories featuring characters that share experiences similar to mine, i.e. trying to succeed professionally in settings where you’re under-represented.I was pleasantly surprised by how engaging Black Dog, the first book in the Cooper & Fry series, is. The main mystery is built around the disappearance and (inevitable) demise of a 15-year-old girl who is the daughter of the nouveau riche couple who own the biggest house in the Edendale area. However, as with all good books in the mystery genre, it’s not the central case that’s important but it's the people working on the case who are. Ben Cooper is a young, handsome, local “golden boy” who is a Detective Constable with a bright future and apparent rapid promotion ahead of him, despite his police father having been killed in the line of duty a mere 2 years before, leading to the psychological breakdown of his mother. Diane Fry is also a young Detective Constable who has recently transferred to the E-division police force after a traumatic event which she’s determined not to let slow her progress on the fast track to professional success in the police. They are polar opposites; Cooper is instinctive, well-liked by his colleagues and generally attuned to the sensibilities and sensitivities of the locals. Fry, on the other hand, is an outsider, perceived as a nervy, ambitious woman seeking to rise in the ranks by taking advantage of any situation to get noticed and advance her career. Somehow the two are paired together and sparks fly. There is definitely NOT sexual tension between the two, but there is professional rivalry (and perhaps personal antipathy), especially when Cooper realizes that Fry is much more likely to get the next Detective Sergeant promotion after his family problems start to negatively impact his job performance.The details of the mystery in Black Dog are quite interesting, with a surplus of suspects and a large number of red herrings thrown at the reader. Even when the perpetrator was basically reduced to a cast of 3, I didn’t pick the correct person responsible for the crimes. The book is quite suspenseful and does a good job of slowly revealing different aspects of the personality traits of both Cooper and Fry which make me very interested to see how their interactions develop in future books. The series is quite substantial (almost 18 books at this writing) and I’m a bit surprised it doesn’t appear to have the same level of popularity and renown as similar books in this genre such as the Tony Hill & Carol Jordan series by Val McDermid or the Duncan Kincaid & Gemma James series by Deborah Crombie. I think the reason may be because it doesn’t appear as if there’s a romantic relationship between the two lead characters (at least so far). The setting of the books is also somewhat unusual, a rural, sparsely populated, mountainous area (called the Peak Pike District) that is an actual tourist attraction. The supporting characters are not particularly diverse, but when there are two main characters who are both nuanced and well-drawn, that can sustain and fuel my interest in reading more books in the series, which I definitely intend to do.