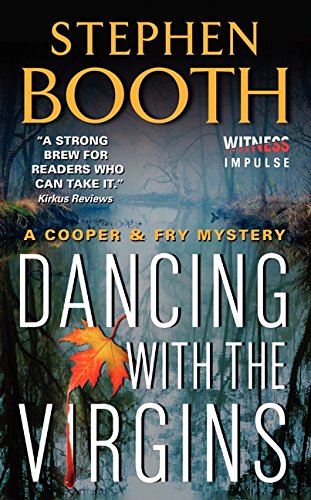 Dancing with the Virgins is the second book in the Cooper & Fry police-procedural murder-mystery series written by Stephen Booth featuring DC Ben Cooper and DS Diane Fry, set in the Peak District of Northern England. About three-quarters through reading the first book in the series, Black Dog, I decided I wanted to spend more time with Cooper & Fry and found the kindle version of book 2 at the Los Angeles Public Library (my local library), lapl.org.The central feature of the Cooper & Fry books is the relationship between the two main characters, which (somewhat surprisingly) is based on mutual animosity, professional distrust and ambiguous attraction. I had half-expected romantic tension to play some part in the series by now but that is most definitely not the case. In my opinion, this is an excellent choice made by their creator, Stephen Booth, and one that definitely whets my appetite to read what happens next with them as the series progresses.In Dancing with the Virgins the titular virgins are stones at the top of the moors where a woman has been expertly stabbed through the heart (via the back), just a few weeks after another woman was horribly maimed in the face as a result of another knife attack. DS Diane Fry is working on the first attack, trying to figure out a way to get the amnesiac victim to remember any aspect of the incident to help the police catch the culprit. Meanwhile, DC Ben Cooper has been paired with a new partner, the large and obtuse DC Weenink, who clearly doesn’t take his oath “to serve and protect” the community as seriously or energetically as Ben does. The reader spends a lot of time in Ben’s head, and he’s clearly a nice guy. We spend a fair amount of time Diane’s head as well, and it’s pretty clear she’s not as “nice” as Ben is. Which approach to policing (Ben’s or Diane’s) is actually more effective at solving crime is a key conflict in the books, as well as the question of which approach makes for a happier (or more fulfilling) life. Both Ben and Diane have complicated back stories. Ben is the son of a well-known police officer who was a local hero who died in the line of duty two years before the events in Dancing with the Virgins and he still lives at home on the family farm with his brother’s family and mentally-ill mother. Diane grew up in foster care with an older sister who became a drug addict and disappeared as a young teenager. Recently she suffered a sexual assault (before the events of the first book Black Dog) and her ongoing search for her missing sister and that traumatic event are the reason for this city girl transferring to the very rural area in which the books are set. The other officers (both supervisory and collegial) are supporting characters in the series, and after two books they are becoming more familiar even if they aren’t becoming more interesting or important features of the story.Overall, I would say Dancing with the Virgins is a strong second entry in this British police procedural series. We learn more about the protagonists, in the context of an intriguing set of mysteries, murders and misdemeanors. One of the weaknesses in this particular entry is its slightly unsatisfying conclusion. There are three primary crimes being investigated in Dancing with the Virgins and by the end the reader is only given definitive answers about the perpetrators of two of the three crimes. In fact, the conclusion of the book seems somewhat rushed and inconclusive, because some of the important issues in Fry’s and Cooper’s lives remain unresolved. Happily, this leaves room for more character development in the following books, which I am definitely looking forward to. However, I would have preferred more clarity and closure on "whodunnit" for some of the other mysteries in the book. Other readers who have enjoyed books in this genre by Peter Robinson, Peter James or Ian Rankin, will likely enjoy Stephen Booth's Cooper & Fry mysteries as well.