BOOK REVIEW: The Fires of Vengeance (Burning, #2) by Evan Winters 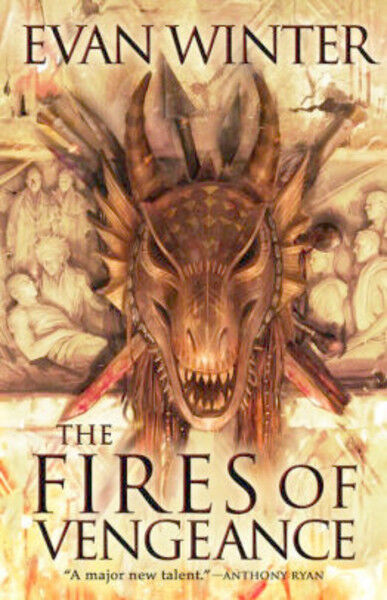 The Fires of Vengeance by Evan Winter is the sequel to the author’s debut novel The Rage of Dragons. These books are firmly in the category of epic fantasy: they are both chockfull of dragons, swords, metaphysical powers, gods and warfare. The books are set in something resembling a Bronze Era civilization, with a strict caste-based society that appears to modeled on an ancient African culture. Winter is one of the very few African-American writers working in this genre and he makes it very clear that the characters in his books are primarily what we could call “people of color” with skin tones of various hues from very light brown (tea with lots and lots of milk) to the darkest black (fire-scorched wood).

The main character in the series is Tau Solarin, who in The Rage of Dragons had a fairly familiar plot of the lowly outsider underdog who eventually becomes a celebrated champion after overcoming multiple trials and tribulations. In The Fires of Vengeance, Tau’s developing relationship with his Queen, Tsiora Omehia, becomes one of the primary threads of the complicated plot. In addition to this romantic intrigue plot line, the story in the second book also includes political intrigue between Tsiora and her sister Esi who has claimed she is the rightful claimant to the throne and the intercultural intrigue of the ongoing disintegration of the Omehi caste system. However, all of these other threads are overshadowed by the imminent battle between the Omehi people and the more populous indigenous inhabitants of the Xidda continent. And in addition to the struggles between different factions of the Omehi and the future struggle between the Omehi and Xiddans , there’s a non-negligible threat from the Cull, the near-omniscient murderous beings who drove the Omehi from their ancestral land of Osonte, decimating them in the process. It was that fabled escape from Osonte, dozens of generations before the events told in The Burning books that caused the Omehi to arrive to Xiddan and displace the indigenous folks on the peninsula, who unsurprisingly view them as colonizing marauders who should be exterminated.The Omehi feel like the Xiddan pensinsula is overrun by godless, murderous heathens who don't deserve to occupy the land their forefathers fought and died for so the stage is set for genocidal war.  Because its been so long, many Omehi don’t even think The Cull are real (which is a dead giveaway that at some point these Big Baddies are gonna show up at some point!)

A key feature of the books is the existence and prominence of Isihogo, the Underworld, where time runs faster than the real world and where the power of gods and demons manifest themselves. Generally, only priestesses with a rare ability and years of training are able to enter Isohogo but Tau has been using it as a means to hone his fighting skills to the point where he is the best fighter the Omehi have seen in generations, perhaps ever. (When you get killed by Demons in the spirit world it doesn’t physically harm you and you wake up back in the real world with the memory of what happened; many people can become susceptible to emotional and mental damage from the experience. Because Tau is fueled by a volcanic level of rage and vengeance he thinks that the costs, such as the hallucinations he regularly suffers, are worth the enhanced fighting prowess and imperviousness to pain he gains.)

As I mentioned, Omehi society is strictly caste-based, with two primary groups, Nobles and Lessers. The author is somewhat vague about whether the castes are actually biologically distinct, or whether, like race, the caste divisions in Omehi society are socially constructed identities reified by cultural norms and historical tradition. Nobles are generally larger, faster and stronger than Lessers, but a key point we learn in the first book is that the two groups can procreate with each other (although of course this is strongly discouraged). There are various strata in both of the two primary castes, with the absolute lowest being “Drudges” who are basically outcasts from Lesser society and the highest are the Royal Nobles, which includes Tsiora. In both books, one of the central fights Tau has to take on is the assumption that as a Lesser he has no chance of besting a Noble (of any level) in combat. This of course turns out to be spectacularly untrue and is the primary plot device of The Rage of Dragons. However, we do learn in The Fires of Vengeance that Nobles have stronger connections Isihogo which may account for their advantages (and also would tend to lend credence to the idea that the caste divisions are “real”). However, like race, just because one group of people who are racialized into a particular group tend to have more or less of a particular trait or tendency does not mean that race is not a fiction. The clever and conspicuous depiction and deployment of race is one of the most attractive features of the series for me, especially since any depiction of difference from a white heteronormative ideal is so rare in most fantasy and science fiction.

Although the two books share numerous similarities (depiction of multiple battles and one-on-one skirmishes, political and romantic intrigues, cultural/ethnic stereotyping and demons, dragons and disasters, oh my!) The Fires of Vengeance improves on The Rage of Dragons by de-centering Tau slightly and making it clear that two of the most important characters from the first book are both gay (and a couple!). Of course, Tau in his single-minded focus on getting revenge for the deprivations he suffered in the first book is one of the last to figure out the situation but he takes it completely in stride. As a gay reader of the books, the complete absence of homosexuality in the all-male military settings of the first book was a curious and problematic defect that I’m very happy was corrected in the second book.

I suppose one of the (slight) quibbles one could have with The Fires of Vengeance is that it doesn’t resolve most of the larger tensions in the plot and ends with the inclusion of a huge, paradigm-shifting twist. That said, there’s a lot that does happen in the second book of The Burning, with multiple significant characters dying and/or having life-altering consequences due to the action. Winter is not one to provide his characters with plot armor, which is a refreshing change.  Apparently the series may become a quartet instead of the expected trilogy, which is fine by me, because The Burning is fast becoming one of my favorite epic fantasy series. For people who like the work of Brent Weeks (Lightbringer series, Night Angel trilogy) and Peter Brett (Demon Cycle) I’m confident you will also enjoy these action-packed, engaging books by Evan Winter!