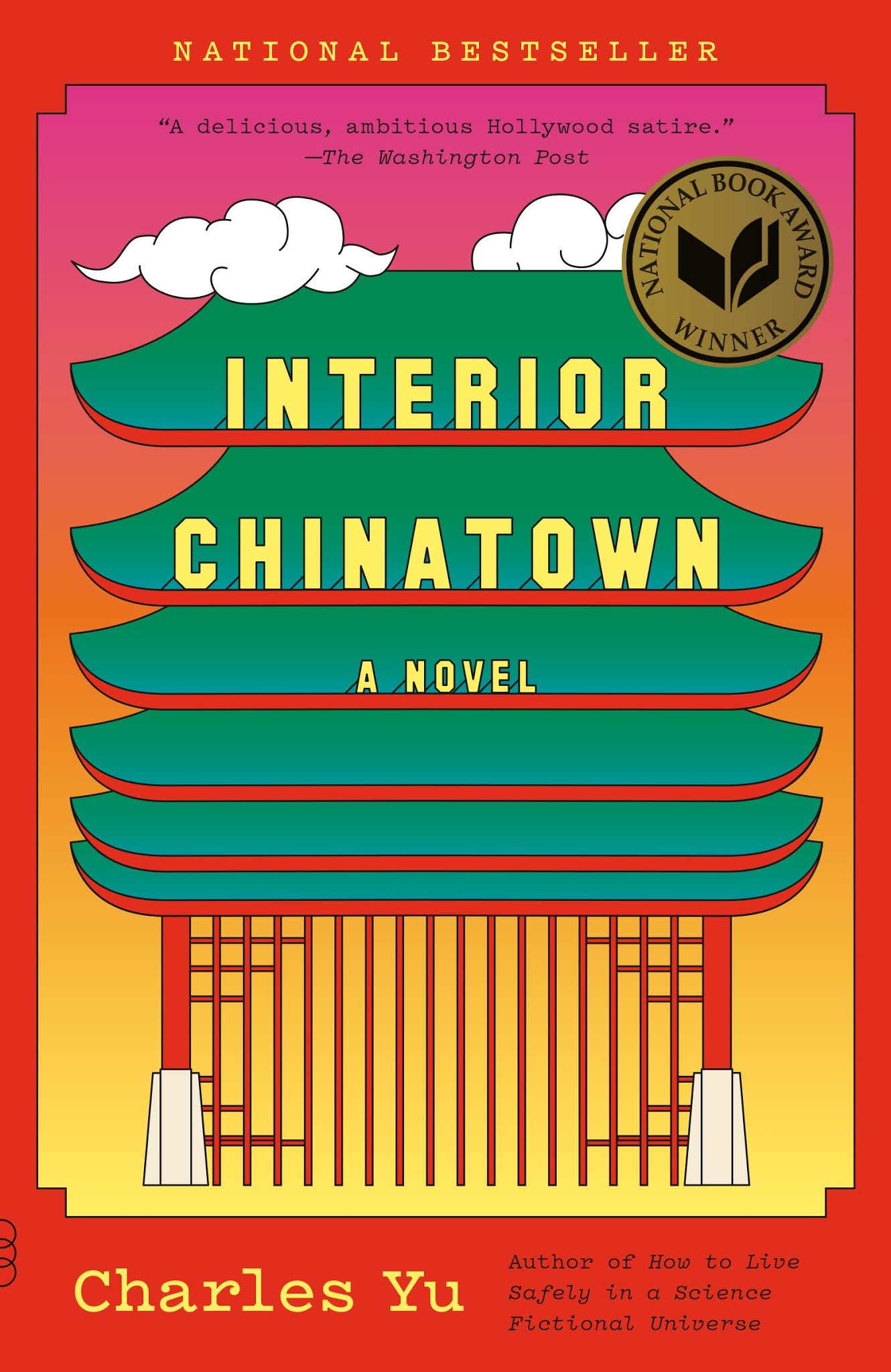 Interior Chinatown by Charles Yu is the winner of the 2020 National Book Award for Fiction. The book is a short, clever exposition on stereotypical media portrayals of Asian-Americans. It uses the narrative conceit of appearing to be a screenplay of a television show that features Willis Wu as a “Generic Asian Man” who is trying to be cast as the ultimate character for an Asian male: “Kung Fu Guy.” But generally Willis only gets roles like “Background Oriental Male" and “Delivery Guy.“ Willis lives in a SRO tenement with a number of other Asian-Americans which has a Chinese restaurant on the first floor named Golden Palace Restaurant.One of the central bits of Interior Chinatown is the depiction of a television show called Black and White. This is a stereotypical cop show featuring a Black man (named Miles Turner) and a white woman (named Sarah Green) who are police partners who solve crimes. Miles is very muscular, handsome, but curiously bigoted towards Asians and is the “bad cop” while Green is also very attractive, statuesque and is the “good cop.” Yu uses the trope of the buddy cop show to highlight other familiar stereotypes (about cop shows, Black people, women cops and many more). Willis eventually gets a role on the show where he has to speak in a broken-English accent and do a bunch of kung fu before he gets shot and killed in the main dining room of the Golden Palace Restaurant. This then makes Willis subject to the rule that he can’t appear on TV for another 45 days.Without the ability to appear on TV, Willis’ story switches focus to his private life. Here Interior Chinatown begins to lose its way by sticking to the screenplay format even though now we are following the "real" story of the actor Willis Wu who had appeared on the fiction show Black and White. The “show” the book/script is now following becomes a family drama as Willis dates a pretty biracial actress named Karen Lee whom he met on the set of Black and White (in the episode in which his character died). Karen and Willis get married and have a little girl named Phoebe. But they do not live happily ever after because Willis is obsessed with being cast as Kung Fu Guy and even when Karen gets the opportunity to be the lead of her own show instead of being happy for her, Willis is resentful. So then he finds himself playing the role of Part-time Dad to his daughter.Eventually Willis does become Kung Fu Guy but he realizes it’s a role that he’s not suited for and storms off the set. Bizarrely, Turner and Green show up and arrest him for being responsible for his own disappearance. He’s put on trial and his lawyer is Older Brother, who makes an impassioned argument that Willis has an inferiority complex because of all the examples of anti-Asian policies and practices in American law and culture which have oppressed people who look like him.

One of the central ideas of the book is that there are multiple levels of “fictionality” occurring in the story simultaneously. The story Interior Chinatown is telling is always in the form of a screenplay, even when the focus switches from the fictional cop show, to the "real" family drama of the actor Willis Wu to the courtroom drama of his disappearance. It is very clever writing and allows the author to communicate multiple messages simultaneously but instead of working on more than one level, for me the book ceases to be an enjoyable one. That being said, like a screenplay, it is a very quick read. There’s a lot of white space and it’s well under 250 pages. Despite being short, Interior Chinatown is definitely not a lightweight book, even though its format would tend to send that message. Although ultimately the book didn’t “work” for me, I am glad that I read it and I do agree that the topic of anti-Asian sentiment and stereotypical portrayal of racial and ethnic minorities in the media is an important topic that the book dramatized in effective fashion. I just think Yu tried to do to much at once, and thus blunted his own overall impact.