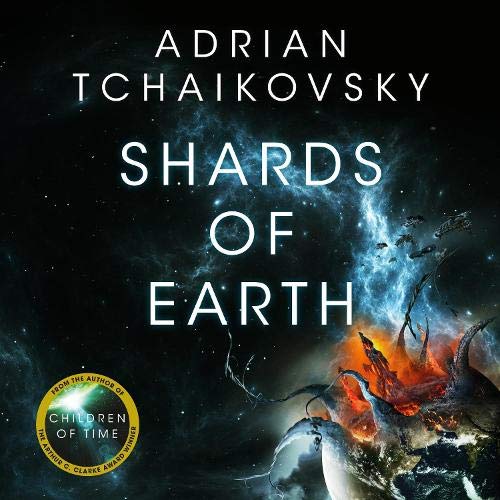 Shards of Earth is the first installment in a brand new space opera trilogy by Adrian Tchaikovsky, one of the most prolific and creative science fiction authors working today. Space opera is my favorite genre of book so discovering a new entry is always an exciting treat.

Shards of Earth has aliens, spaceships, space pirates, planet-destroying machines, motley crew, genetically modified humans, multiple political factions and incredibly advanced technology nearly indistinguishable from magic. The premise of the story is that Earth (and several other planets colonized by humans) were physically manipulated by mysterious gigantic alien vessels/creatures called the Architects into bizarrely artistic, lifeless shapes, rendering them uninhabitable and killing billions in the process. These apocalyptic events happened a full half-century before the time period the first book is set in but the now-scattered human diaspora still lives in fear, wondering and waiting for the return of the Architects to complete the extermination of the species.

The main characters in the story are Idris Telemmier (an Intermediary, i.e. a human who has been biologically modified to enhance his ability to access unSpace and propel vehicles across vast distances) and Solace (a parthogenetically created soldier who has a history with Idris and is on a secret mission). Both Solace and Idris had a role in the last battle which ended the Architects War 50 years ago, but the time has affected each of them differently.

Idris and Solace are two members of an eclectic crew of a salvage vessel called The Vulture God. The crew of The Vulture God contains a number of different aliens and differently-abled humans. Tchaikovsky is a true master at thinking up and depicting aliens in a way that readers can relate to, despite the physical and cultural peculiarities they possess. It’s amazing how he can write characters that are so different from humans but whose actions, beliefs and motivations are so familiar and compelling to readers.

In fact one of the most enjoyable aspects of reading Tchaikovsky’s work in general (and Shards of Earth in particular) is becoming immersed in the worlds the author creates. For example, the setting of Shards of Earth includes the political situation of different factions of humans competing for supremacy, each of whom is convinced their ideology is the best choice for humanity. This, combined with at least a half-dozen alien species, can make the book a little hard to follow at first, but eventually the reader gets our bearings and it’s this level of complexity and attention to detail that illustrates the depth of Tchaikovsky’s world-building.

In addition to the world-building and the setting, the plot is a key highlight of Shards of Earth.  While on a seemingly routine salvage mission, The Vulture God finds a surprising artifact that could upend life for all humans in the galaxy by indicating that the Architects have returned. However, after this happens, there are many different entities which very much want to obtain what their ship has found and the crew has to do whatever it takes to protect their ship and its contents. This involves a number of action-packed sequences that have significant consequences for many of the characters that we have recently encountered (not everyone survives these dangerous and exciting events, which is probably the way it should be). Eventually the chase is resolved in a way that doesn’t leave everyone satisfied but the original problem is overwhelmed by the stakes involved in more recent developments. The story has a scale which is both galactic in nature and intimate: the relationship between Idris and Solace is one of its key elements.

Overall, Shards of Earth is an exciting standalone space opera novel as well as the first entry in what is sure to be a compelling trilogy about the fate of humanity in a Universe where there are existential threats to its survival and prior episodes of genocidal trauma.