BOOK REVIEW: The Galaxy and the Ground Within (Wayfarers, #4) by Becky Chambers 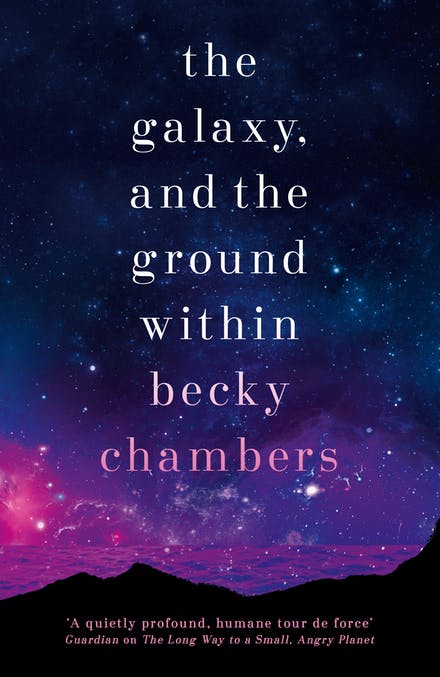 The Galaxy and The Ground Within is the fourth entry in the Wayfarers series by Becky Chambers, a quirky collection of loosely connected stories of life about an interstellar, multifarious civilization where humans are just one among a large number of space-faring species. The Wayfarers series won the Hugo award for Best Series in 2019 for Becky Chambers.

The previous books in the series are The Long Way to a Small, Angry Planet (2014); A Closed and Common Orbit (2016); and Record of a Spaceborn Few (2018). The Galaxy and The Ground Within was published in 2021. The books are all similar yet also very different, with nebulous connections between the individual entries. Basically what they all share is a vibe, which a significant fraction of readers find admirable and appealing. I suppose they can be classified as “space opera” because the formal definition of the term is “an adventure science-fiction story” and there are aliens, spaceships and conflict in all of the Wayfarer books.

However what sets the Wayfarers books apart is that the “narrative tension” or conflict in these books is often at a much lower scale/volume than what one typically sees in a space opera novel. This "lack" of action sometimes leads to complaints that “nothing happens” in these books but I disagree. Instead, most of the action is more individualized and impacts a small number of characters.

For example, in The Galaxy and The Ground Within a horrible accident happens that results in the destruction of multiple satellites over a planet which is usually a busy way station for travelers (called the Five-Hop One Stop) across the galaxy. The result is that a handful of aliens have their travel plans disrupted and are forced to interact with each other and the manager of the way station for an extended period of time. It’s basically the interstellar equivalent of the famous Icelandic volcanic eruption that disrupted inter-Atlantic travel several years ago, leaving travelers stranded in various airports. For the people involved it’s a big deal, of course, but for an uninvolved observer it is inconsequential.

What Chambers does is try to make us care about what happens by getting us to know more about the aliens (in this Wayfarers book there are no speaking characters that are human) while slowly revealing to us the impact of the travel delay on their lives. Chambers incorporates diversity in multiple ways into her books. In some of the earlier books, there was diversity in the kind of intelligence (artificial or computer-based intelligence versus biological) was a theme. In in The Galaxy and The Ground Within there is a prominent non-binary character and multiple characters perform their gender in a way that would surprise humans by their fluidity (like "male" characters either getting pregnant or having borne offspring).

Overall, I liked this book about as much as the other books in the series but I must admit that they are a specialized, acquired taste for the vast majority of science fiction fans who are used to their space opera in the mode of Star Trek or Star Wars or The Expanse (that is, action-packed, thrill rides with weapons, aliens, discovery and suspense). That said, there are still some low-key levels of enjoyment from reading the Wayfarers books and if you have read the others, you will most likely enjoy The Galaxy and The Ground Within too.