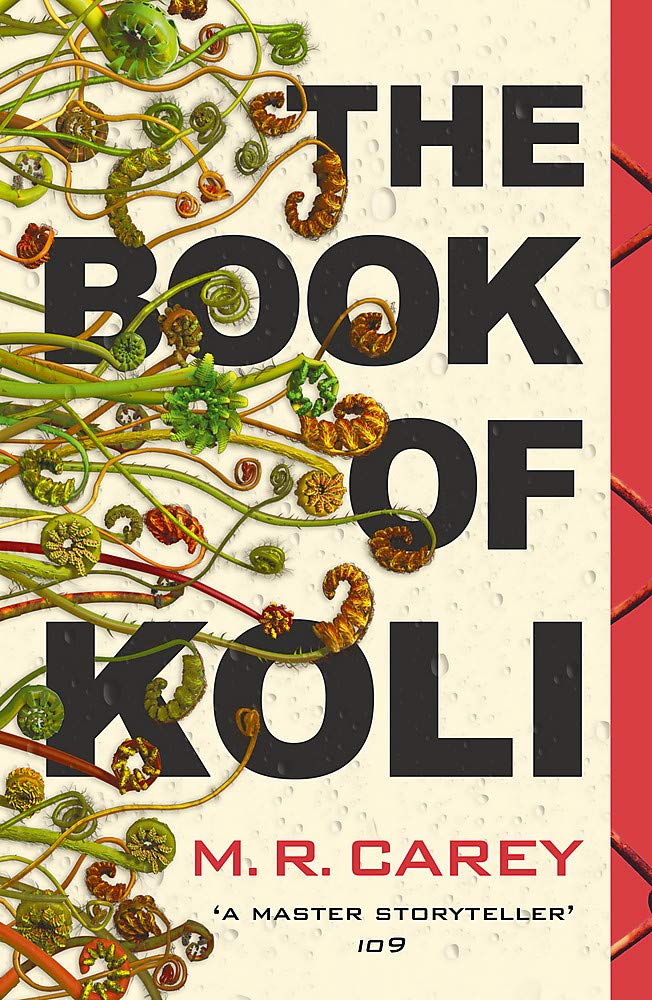 The first book in the Rampart trilogy by M.R. Carey is The Book of Koli. Carey is probably best known as the author of The Girl with All the Gifts and its sequel The Boy on the Bridge. Both of those books are set in post-apocalyptic dystopias and feature a story where a young child is the central character. I enjoyed both of them; Carey has a knack for writing characters who are in bizarre situations that the reader can emotionally connect to. In The Book of Koli this pattern is repeated, the protagonist Koli is a young, dark-skinned teenager growing up in the small town of Mythen Rood in a post-apocalyptic version of Britain that seems related to but is very different from ours. The first thing the reader discovers is that there is almost no technology in Koli’s world, and that what technological devices do remain are incredibly rare and highly valued. This is because the knowledge no longer exists to create or repair them, and everyone is also aware they are relics of a more technologically advanced past.

The Book of Koli is told as a first-person account of Koli’s experiences and feelings. In the beginning of the book he’s a teenager who has just turned sixteen and has two main friends his age named Haijon (Jon) Vennastin and Demar (Spinner) Tanhide. Mythen Rood is a town of approximately two hundred people and there  is no school so everyone, from a very early age contributes to the well-being of the collective. Koli collects wood from the forest, Spinner works  with her father to tan and cure animal hides while Jon doesn’t do much of anything since he’s a Vennastin.  The Vennastins have basically ruled Mythen Rood because several members of the family have had the ability to control the few remaining technological devices in the Village’s possessions. Such people were called Ramparts, and Jon's mother is called Rampart Fire because she controls a device which is essentially a portable flamethrower. Ramparts get to live in the largest and best house in the Village, called Rampart Hold. Ostensibly, everyone has the chance to become a Rampart because at age 16 they are tested to see if the “old tech” responds to them. Since everyone in the village is functionally illiterate and unaware of basic scientific information like the germ theory of disease they are completely inexperienced with how technology works and basically treat the old tech like magic. There are some grumbles about only Vennastins becoming Ramparts but most villagers just think that’s just the way the world is and they have to accept it.

Koli, Jon and Spinner all take the Rampart test and only Jon passes the test. This event has a profound effect on the social dynamics of the trio since Koli was starting to have feelings for Spinner and he is surprised when Jon reveals he has feelings for Spinner and is devastated when Spinner agrees to marry Jon.  Around this time Mythen Rood is visited by a traveling healer named Ursula who has some amazing tech of her own (an entire vehicle called The Drudge which is basically a mobile military hospital) and who basically travels around  trying to correct birth defects and other disorders that are resulting from the lack of diversity in the gene pool of the dwindling human population. Ursula reveals to Koli that tech is not magical and he realizes the reason why he failed the Rampart test and Jon passed it is because the Vennastins have been keeping secrets about how the old tech works for decades, he is deservedly angry and steals a bit of old tech from Rampart Hold. Unfortunately for him it turns out that the device he stole isn’t useful as a weapon but instead is a Sony Dreamsleeve (basically a fancy audio player with an AI-driven controller called Monono Aware). When the rest of the Village finds out what he did, the Vennastins banish him from the village due to his theft of the old tech. They expect this to be a death sentence because in these times the flora and fauna have become much more dangerous to humans, especially the fauna. Plants can move, and they can kill animals (including humans) in many different ways. However, despite this punishment one of the Ramparts follows Koli and attacks him and through an unfortunate accident (caused by the Rampart’s lack of familiarity with the old tech device he wore) he ends up dead and the device is destroyed. Of course, Koli gets blamed for both events and back at the village his mom and sisters are ostracized for being related to Koli Faceless.

Koli has several adventures that place him in extreme danger but by the end of the book, he, Ursula, Monono and a transgender girl named Cup (who had previously been Koli’s kidnapper and pursuer) agree to go on a journey to find London and a source of more old tech that can assist Ursula in her quest to stabilize the longtime survival of the human race.

One of the most interesting features of The Book of Koli is the way the author comments on this dystopian future (and our problematic current ) by depicting how Koli reacts to or views the actions and beliefs of the people he meets.  For example, he’s matter-of-fact about his “tumble” (sexual hook up) with another boy but not necessarily inclined to do it again. He doesn’t care that even though Cup has a large Adam’s apple and wisps of facial hair that she wants to be acknowledged as a girl, even though he realizes some other people may have issues with the situation. Just because he’s ignorant and inexperienced does not mean he’s unintelligent. It’s fun to spend time with him, and that’s why I quickly proceeded to read the other two books in the series, The Trials of Koli and The Fall of Koli.