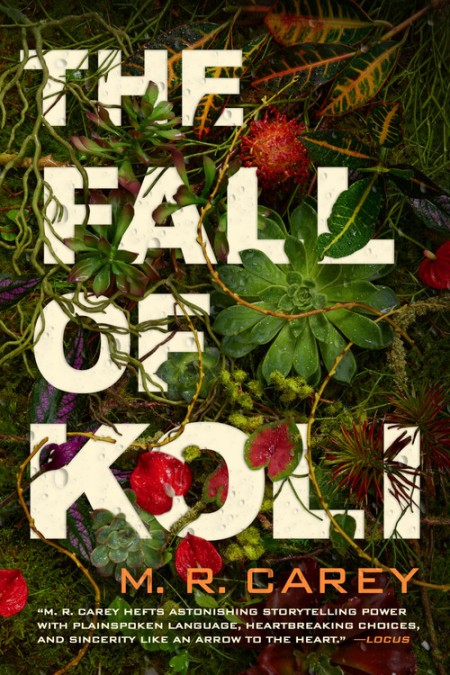 The Fall of Koli is the third and final book in the Rampart trilogy by M.R. Carey, author of The Girl with All the Gifts, The Trials of Koli and The Book of Koli. The final book in a trilogy is always tough (for the reader and the author) because it has to try and resolve all the plot threads, answer all the questions, complete all the character developments and reveal all the secrets left over from the first two books. That can be a lot for one book to do, and sometimes (maybe even often) the final book doesn’t do it all successfully. However, in the case of The Fall of Koli I believe that it mostly succeeds in achieving these aims.

The Rampart trilogy is primarily about what happens to Koli, a 16-year-old dark-brown boy, after he gets kicked out of his village of Mythen Rood in post-apocalyptic Britain when he reveals he has stolen and is able to use a bit of “old tech” called a Sony Dreamsleeve, which is an AI-enabled music player. The Book of Koli is primarily about the immediate aftermath of Koli’s exile and how he meets his traveling companions Ursula, Cup and Monono. The Trials of Koli continues Koli’s story but expands it by also following Spinner and Jon, Koli’s best friends who he left behind in Mythen Rood after he disrupted their wedding with the revelations of his misdeeds.

In The Fall of Koli the action is split between what happens when Koli and crew find the Sword of Albion, a humongous ship filled to the brim with military hardware and weapons but only  three very peculiar humans, one of whom is even younger than Koli, and Mythen Rood, where Spinner is leading the preparations for a battle with Half-Ax, a much larger community than Mythen Rood whose leader is the Peacemaker, someone who believes all tech everywhere belongs to him and will do almost anything to get it.

The first-person POVs of Koli and Spinner that appeared in the first two books are joined by entries from Monono in The Fall of Koli. This is a great addition to the book, especially after Cup, Koli, and Ursula find themselves essentially imprisoned on the Sword of Albion. Eventually they discover that the Sword of Albion is part of a last-ditch plan by Stanley Banner, the last dictator of Great Britain, to use a clone with his downloaded memories to lead an invasion to re-conquer Britain after his death. Banner didn’t realize that the robots he left to run the program would take hundreds of years to complete the plan and happily, thanks to Koli (and mostly Monono) Stanna Banna’s plan is foiled and humanity is saved. Monono is able to salvage some of the heavy machinery from the Sword of Albion and Koli decides that he can help Ursula improve the “gin pull” (gene pool) of humanity by connecting the small towns and villages like Mythen Rood with paved roads. So that’s what he sets out to do as he slowly makes his way back to his hometown.

The end of the book is action-packed and suspenseful, as it becomes an unwitting race against time between the arrival of the Peacemarker and his army and Koli and his “army” of motorized construction vehicles. The conclusion has a surprising and heart-rending twist that I won’t reveal here. Suffice it to say, the ending makes good on the emotional investment of spending the better part of three books following and caring about what happens to a young black teenaged boy named Koli after he makes a mistake and is exiled from the only place he has ever known as home.

Overall, The Fall of Koli is a great ending to the Rampart trilogy, which will go down as one of the more memorable and emotionally resonant series in the post-apocalyptic speculative fiction genre.