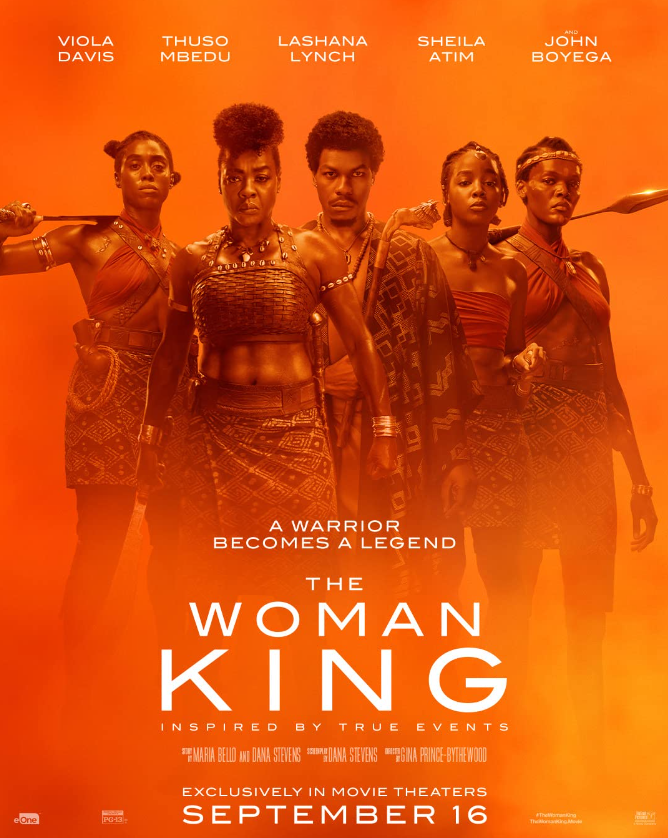 It's been quite awhile since I saw a movie in the theaters, but last weekend I saw two of them! The husband and I intended to see Bros opening weekend with another gay couple but when it turned out they couldn't see it until Sunday we decided to go see The Woman King on Saturday, since it had stellar reviews and was only available in theaters. I'm glad we did!

The Woman King is a star vehicle for Viola Davis, the most Oscar-nominated Black actress of all time (and winner of the 2016 Best Supporting Actress for Fences). However, it is also a rarity among studio films, with a predominantly Black female cast. The movie is about the legendary Agojie, the "virgin African Amazons" who were an all-female army in the West African kingdom of Dahomey during the slave era. The film features John Boyega (The Force Awakens, Small Axe), Thuso Mbedu (The Underground Railroad), Lashana Lynch, Sheila Atim, Jordan Bolger and Hero Fiennes Tiffin. The last actor plays Santo Fereirra, the main white character in the film, a slaver from Brazil who is working with the enemies of the Dahomey to buy and ship captured Africans into slavery in the Americas. He arrives with his interracial friend Malik played by the pulchritudinous Jordan Bolger, who is the son of a Dahomey mother and white father.

Of course any film about slavery is effused with violence, but in this case the violence is mainly done by the Black female characters in the film (the Agojie).  The film is set in 1823 and makes clear that both the Dahomey and the Oyo participated in the slave trade, by selling captured African combatants to the slavers. However in the movie, Davis' character, Nanisca, the head of the Agojie decries the practice to King Ghezo (played by Boyega) and argues the Dahomey could and should trade palm oil with the white man instead. The primary conflict in The Woman King is between the Kingdom of Dahomey and the Oyo Empire, who are much larger and to whom the Dahomey pay tribute to. Dahomey refuses to pay tribute and the two nations go to war, with the smaller Agojie army using the superior tactical and strategic prowess of Davis' General Nanisca to eventually become victorious. However, during the main Oyo-Dahomey battle in the movie some of the main Agojie characters we have been following (played by Lynch and Mbedu) are captured and taken to be sold into slavery. Mbedu's character (Nawi) is bought by Bolger's character (Malik) in order to rescue her. (The two had their "meet-cute" moment earlier in the film when Nawi finds Malik bathing in a nearby waterfall and takes his clothes which for me was a highlight of the movie because Malik is phyne!!)

Although being told explicitly by her king not to go and rescue her captured Agojie soldiers, Nanisca goes anyway and along with her most loyal supporters basically destroys the town/port where slaves were being bought and sold and then transported across the Atlantic.

Overall, The Woman King is a well-done, action film (I think I saw someone call it a "a Black female Gladiator or Braveheart") with exceptional performances by Davis and Mbedu. It is exceedingly violent, almost graphically so, since almost all the combat is hand-to-hand with sharp, bladed weapons, a few primitive  guns and some gunpowder-based explosions. Despite the action genre, there is real emotional relationships depicted between many characters, like Nawi and Malik, Nawi and Nanisca, and Nanisca and Amenza (played by Atim). It's one of the best times I have had at the movies in years!