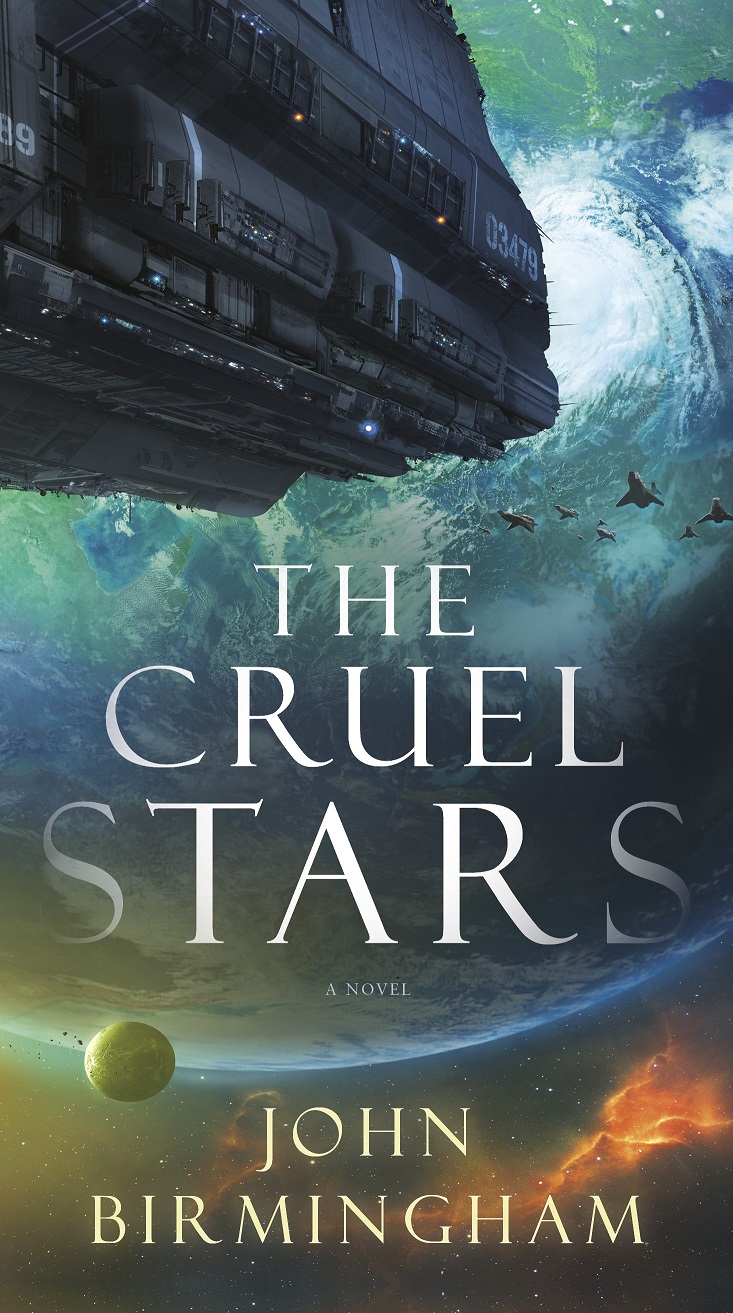 The Cruel Stars by John Birmingham is the first book in a space opera science fiction trilogy with the same name. Birmingham has summarized the Cruel Stars trilogy as “Space Nazis invade and try to ruin everything, everywhere, all over the galaxy.” This is the first book by this author I have read; I did so because a machine learning algorithm recommended The Cruel Stars to me because I have either read, bought or borrowed related/similar books (like The Expanse books by James S.A. Corey and The Final Architecture trilogy by Adrian Tchaikovsky) that led the computer program to extrapolate that I would also enjoy this one. And you know what, the code was right, people, because I completely loved reading The Cruel Stars!
The structure of the book will be quite familiar to regular readers of fantasy and science fiction. The story is told via chapters from the perspective of different characters, similar to the structure of George R.R. Martin’s The Song of Ice and Fire and James S.A. Corey’s The Expanse. The five main characters of the The Cruel Stars are Lucinda Chase, a newly minted war hero who gets a field promotion to captain of her ship when the enemy’s sneak attack decapitates the senior leadership of the entire Armadalen military; Frazer McLennan, a foul-mouthed military genius from Scotland turned archaeologist who killed millions of Earth citizens in order to save billions by almost entirely wiping out an invading  army over 700 years ago and by miraculous advances in medicine is still alive (but decrepit); Sephina L’trel, a foul-mouthed lesbian space pirate who leads a small team of violent mercenaries burning to get revenge on the people who killed their loved ones; Princess Alessia Szu Suri sur Montanblanc ul Haq, the 12-year-old scion of an incredibly rich and powerful family who owns and rules the entire planet of Montrachet as well as a galaxy-spanning financial empire; and Corporal Booker3-212162-930-Infantry, a human being who has downloaded his mind into software as a member of a belief system called The Source.
Each of these characters gets their own POV chapters as the story progresses, demonstrating their importance to the plot. However my favorite character in The Cruel Stars is not one of these previously mentioned POV characters, it’s Herodotus, who is an “Armada-level Intellect,” which means he is a sentient artificial intelligence with technological powers that are near god-like (such as the ability to teleport or “fold space” at will and near-infinite data processing capacity and speed) along with an incredibly snarky attitude. (Come for the god-like computer, stay for the snark!)
In The Cruel Stars we discover that the Sturm, also known as The Human Republic, the group that McLennan defeated hundreds of years ago (and has not been heard of since) has returned to continue their genocidal war against all humans who have modified their bodies with either technological or genetic enhancements. In the beginning of the book we discover that The Sturm has launched a devastating first strike in the form of a successful malware attack that turns any humans with technological implants who were accessing the galactic equivalent of the Internet at the time into brain-devouring zombies.
The return of The Sturm has life-altering consequences for all of our main characters. Lucinda becomes the captain of her ship, the Defiant, because all the higher ranked officers are struck down by the Sturm malware. Alessia becomes the sole living representative of her family, as the few remaining relatives who were not affected by the initial attack were killed in a grisly execution broadcast galaxy wide. McLennan is captured by the Sturm while conducting an archaeological dig at a site the Human Republic considers sacred but is rescued by Herodotus after only some mild torture has occurred. Sephina has a lucrative heist interrupted and then watches the love of her life slaughtered by Sturm weapons hours after the initial attack. The only person who is positively impacted by the return of the Sturm is Booker, who is in prison sentenced to be permanently deleted at the vey moment the malware attack strikes his penal colony. The warden makes a deal to allow Booker to escape and promises to put in a good word with future authorities if Booker uses his military expertise to fight back and save lives on the prison habitat. Booker agrees to the deal, keeps his end of the bargain and escapes into space implanted in the operating system of a huge security robot.
Overall, The Cruel Stars is a fantastically entertaining space opera with lots of action, humor and violence. The characters are compelling and world-building intriguing. It’s reminiscent of the very best work of Peter F. Hamilton; fans of Hamilton should also read (and I am confident will enjoy!) The Cruel Stars.