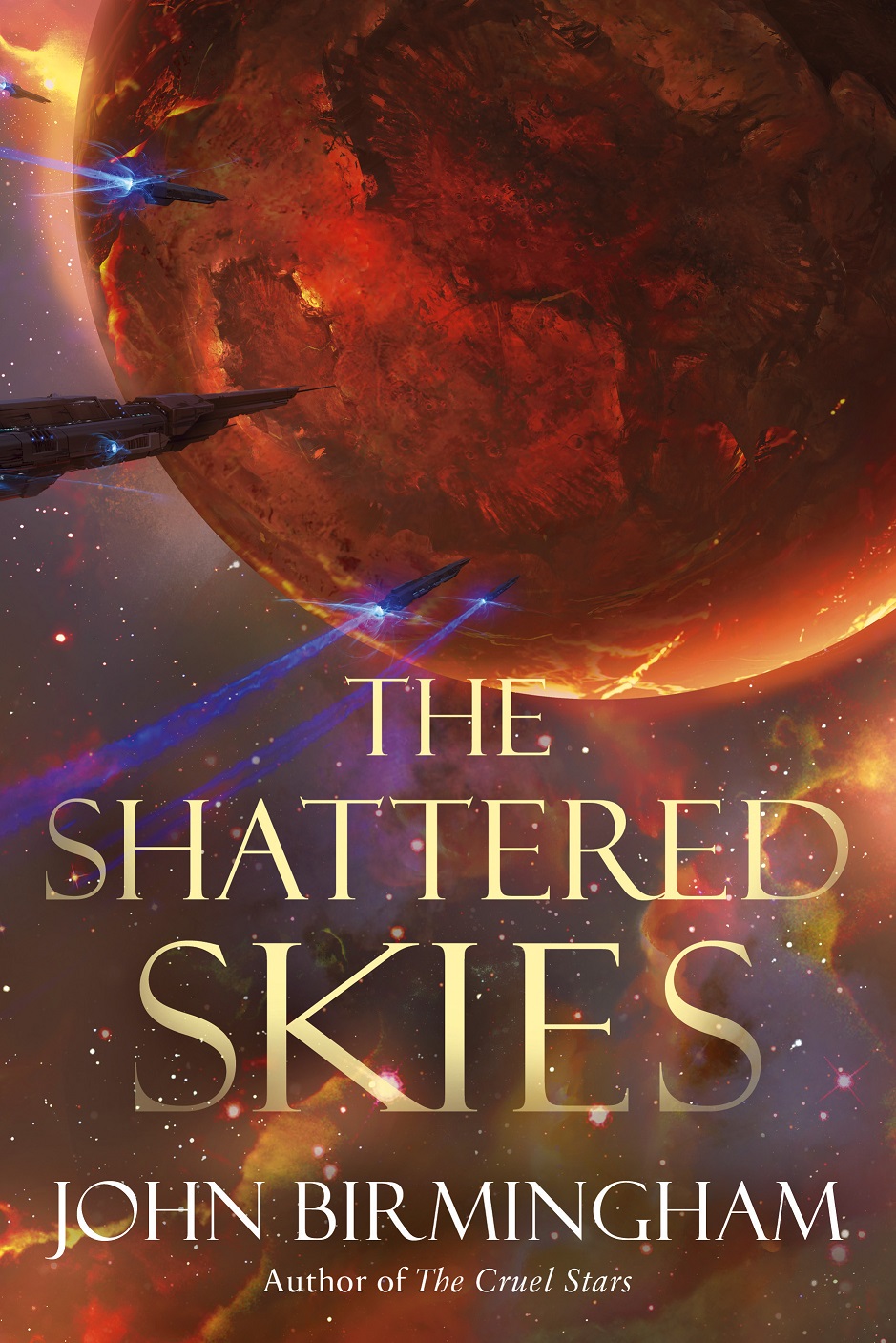 The Shattered Skies by John Birmingham is the second book in the space opera science fiction trilogy called the Cruel Stars. Birmingham has summarized the Cruel Stars trilogy as “Space Nazis invade and try to ruin everything, everywhere, all over the galaxy.” I quite enjoyed reading the first book in the series The Cruel Stars earlier this year and as soon as I finished it I wanted to read the next one in the series and was quite happy to see that it was available. Sadly, the third book in the series is not scheduled to come out until next year. Middle books in trilogies have a reputation for disappointing the reader but in this case The Shattered Skies bucks the trend and continues the story begun in The Cruel Stars in a way that is as exciting, entertaining and engrossing as the first book.
In addition to the five main characters from The Cruel Stars, Lucinda Chase, Frazer McLennan, Sephina L’trel, Princess Alessia and Booker, The Shattered Skies introduces two new POV characters in Captain Anders Revell, an aide-de-camp of a high-ranking Sturm military leader who is investigating the surprising defeat that befell the Sturm in the first book, and Sub-commandant Domi Surprarto, a underling suddenly promoted to captain of the Javan Navy ship Makassar after the Sturm malware turns the top brass into mindless zombies.
The Shattered Skies has the same frenetic action, snarky humor, political intrigue and social commentary of  The Cruel Stars. Additionally, the author uses the addition of the new characters to provide a more nuanced view about the two warring sides in the Sturm-Volume war. In the first book, we are basically introduced to the Sturm as galaxy-invading ideological zealots who want to kill everyone who is not a “pure human” if they have had any technological or genetic modifications. And so our assumption is that the people opposing the Sturm are the good guys. However, by giving us Revell’s POV we see that he is quite passionate about his belief that he’s fighting for the “good” side and we see that the Sturm are providing aid and comfort to people (like Lucinda’s father) who have been abused and exploited in a debtors prison planet that they liberated. The fact that the "good guys" support a system where debtors prisons are a real thing begins to raise niggling doubts about the righteousness of their cause. Also, by getting Suprarto’s POV we see that some of the “Allies” on the good guys’ team (like the Javan Army and the Yulin-Irawaddy Collective) have problematic characteristics (they’re extremely hierarchical, rife with corruption and selfish and self-centered). This makes for a more interesting read because as the stakes of the military conflicts go up, the reader starts to more seriously question who they want to win this battle. Which vision for civilization do we really want to prevail? The Sturm's neo-Luddite view of unaltered "natural" humanity? Or the competing corporate capitalist view where single families can own entire planets and control the lives of every sentient being on their "property"? How should the choice be decided? That the Cruel Stars books even raises these questions puts it above most other books in the military sci-fi/space opera genre.
Overall, The Shattered Skies is an excellent space opera, with interesting characters, well-depicted action sequences, neat technology and an exciting plot. Hopefully, the story will all be resolved in the third and final book of the trilogy, expected in summer 2023 (currently I have seen two proposed titles on the internet, The Forever Dead and The Empty Heavens). Whatever it’s called, this book will be on my must-read list!