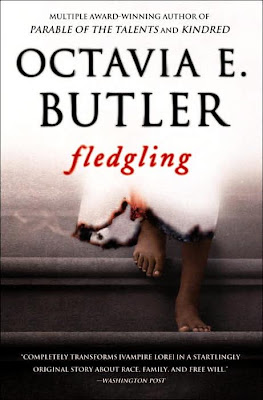 Octavia Butler's twelfth (and last) book came out in paperback recently and I got a copy for my birthday in May. Some of you will remember that I knew the author personally and blogged about my encounters with her previously.

fledgling is a brilliant re-imagination of the vampire myth by one of the most creative writers in the genre of "speculative fiction."

The story begins with a young woman who wakes up, bruised and burned in a cave. The woman leaves a cave and discovers a razed village nearby and meets a young man who she bites, feeds on and then has sex with. One of the many unusual aspects of this tale are the details that the young woman appears physically as a pre-pubescent, dark-skinned female while the man is white and in his 20s.

Eventually we learn that the name of the young vampire is Shori Mathews and although she looks like a 10 or 11 year old she is actually 50-60 years old, which is young (but equivalent to an adolescent or teenager) for her kind, the long-lived symbiotic, vampiric species known as The Ina.

Butler weaves a suspenseful plot around these basic story ideas, as we learn more about the unusual nature of Ina culture and society while the book progresses to a pleasing conclusion.

Some of the idea this "genre fiction" novel grapples with are miscegenation, gender-stratified societies, the nature of addiction and racism. As always, in creative and enthralling ways Butler excites and intrigues the reader with her vision and insight of her final book. It's one of the sadnesses in life that we will not have the opportunity to experience any new works by this gifted author, one of the few African American females writing speculative fiction.