Mad Professah spent the last week on a "Great American Road Trip" to see the tallest and largest trees in the world, Sequoia sempervirens and Sequoiadendron giganteum respectively,which just happen to be several hours drive from my home in Los Angeles. This week, as a blogging special series I will be recounting the details of my trip. 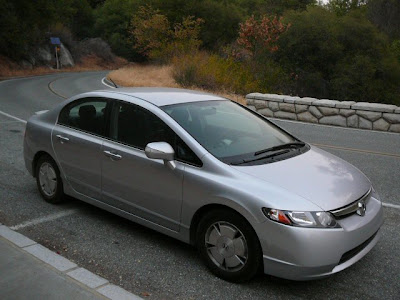 Day 1 was mostly spent picking up a rental car from Fox Rent-a-car near LAX. The other half took public transportation all the way. He walked to the Pasadena Gold Line Southwest Museum station, then took the train to Union Station, and from there the Fly-A-Way Bus to LAX and finally a shuttle bus from LAX to Fox Rent-a-Car. Then it took about an hour to get a grey Honda Civic Hybrid (pictured above) rented. The entire ordeal (from leaving home to arriving back home again in the rental car) took nearly four hours.

I was up in Santa Barbara at a tennis camp the whole time and got picked up around 7:30 pm and we drove up the 101 freeway from Goleta (where University of California, Santa Barbara is) all the way to Sunnyvale, CA.