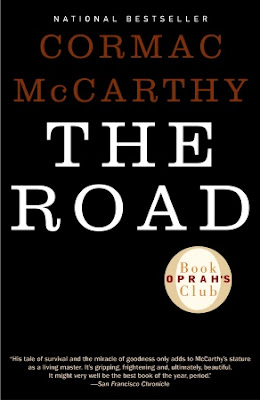 Cormac McCarthy's The Road was clearly The Book of Year in 2007: Although it was published in 2006, the following year The Road was an Oprah's Book Club selection, won the 2007 Pulitzer Prize for Fiction and was a finalist for the National Book Critics Circle Award.

The book will be made into a "major motion picture" starring Viggo Mortensen released this year. McCarthy's novella No Country For Old Men was adapted into a movie by the Coen Brothers which in 2008 won them Oscars for Best Picture, Best Director and Best Adapted Screenplay and a Best Supporting Actor for Javier Bardem.

The Road is the story of a post-apocalyptic world in which A Man and his Son are walking along The Road to The Sea (the West Coast of the United States). The reader is never told the age or names of the main characters. The actual apocalypse is never explained, but the reader is left to make conclusions from tantalizing clues like "a blinding light in the distance" and the fact that there are no longer any birds or animals visible or audible from The Road.

The prose is separated into short, vivid scenes of a few paragraphs in length. It is a mind-numbingly dark and depressing tale.


The book makes the reader confront questions of life and death and attempt to unpack the individual's understanding of hope. For example, what would you do if 99% of the world's population was killed and you were still alive in a world where civilization had broken down completely? Are you an optimist or a pessimist? Would you fight to survive against all odds or would you just give up to "the inevitable"?

I probably wouldn't have read the book if it wasn't the choice for a Gay Men's Book Club that I was invited to. Happily, it is quite a quick read. In some sense it is hard to put down once you start it--but I wouldn't exactly call it an enjoyable experience. I am glad that I read the book, since I was curious about his book that was both an Oprah's Book Club selection and a Pulitzer Prize winner. I'm not so sure that I would recommend it to others, however.