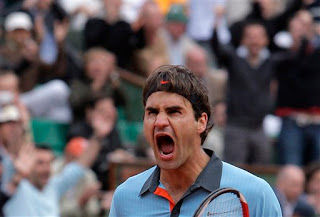 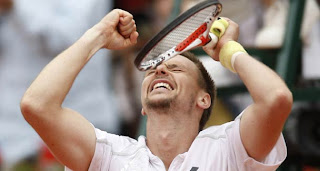 Robin Soderling SWE (23) vs. Roger Federer SUI (2). For the fourth year in a row, Roger Federer is in the Roland Garros final, his 19th career final, matching Ivan Lendl's career record. However, for the first time, Federer will not have his arch-nemesis standing in the way of a major title in Paris. The new opponent is Robin Soderling, who executed one of the great tennis upsets of all time last Sunday when he dismissed World #1 Rafael Nadal (who had never lost a match at the French Open!) in four sets 6-2 6-7(2) 6-4 7-6(2).
When 4-time defending champion Nadal lost in the fourth round, most people thought that Federer became the prohibitive favorite to win the 2009 Roland Garros title. However, since then Federer needed 5 sets to get past a spirited challenge from Tommy Haas in the fourth round and another 5 sets to get past Juan Martin del Potro in the semifinals. Federer was 5-0 and had never lost a set to the Argentine kid but the del Potro who competed on Friday easily won the first set and put up stiff resistance for nearly 3 and a half hours, finally succumbing 3-6 7-6(2) 2-6 6-1 6-4. And this wasn't even the best match of the day, that honor was bestowed upon the barnburner Fernando Gonzalez and Soderling threw down.
Soderling started off very well, winning the first two sets by blasting winners and serving big and got himself to within 6 points of winning during the 3rd set. Then Gonzalez managed to hold, break and hold and suddenly Soderling went through a bad patch and found himself down 0--3 and 1-4 in the fifth and final set. Amazingly, Soderling was able to win 5 consecutive games to clinch his first ever Grand Slam final. He and Gonzo combined for a mind-boggling total of 143 winners, 75 by the eventual winner of the match.
Sunday's final will be huge for both players, but there's no question more of the pressure is on Federer. Everyone expects him to win, since he is no longer facing nadal. If Federer does win, he can silence (most of) the naysayers who would deny him title of the Greatest Of All Time by winning his 14th major title and completing his career Grand Slam. If Soderling wins, he will ensure his name will be enshrined in the history books, as one of the other men who denied (or delayed?) Federer achieving from achieving this status and who beat and replaced Nadal as the King of Clay.

Head-to-head Federer has played Soderling nine times on multiple surfaces and only ever lost one tiebreak set to him but very many of the sets have been close, showing that even before his Paris breakthrough the Swede was a dangerous opponent. The new Soderling is even more lethal, because he surely believes he is on a Mission with Destiny and he now also possesses a powerful, fit body to complement his powerful groundstrokes and nervy serving (120-plus mph second serves).

However, Federer is the most talented player of his generation and at the end of the day he should be able to use his versatility and variety to come up with a solution to win the match. It is also likely that since Soderling is playing in his first Grand Slam final, mentally he will be satisfied with the Finalist label, while Federer will settle for nothing less than his hands on the trophy at the end of the day, for the fourteenth time in a major.

While I too believe Federer will win, we can not forget Soderling's level of play in this tournament. There is something about a player in a zone; and he did take down the one man everyone thought would again take the title. In the end though, Federer's massive grand slam experience should allow him to take his record-tying grand slam title.