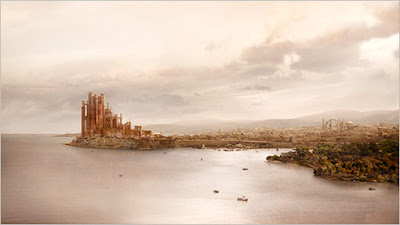 Excellent news! HB0 has announced they have renewed their new fantasy series Game of Thrones for a second season. Game of Thrones is an adaptation of George R.R. Martin's A Song of Ice and Fire series, which is a planned 7-book fantasy series in set in the fictional land of Westeros where seasons can last years and civilization is basically at the Bronze Age of medieval times.

Overall, I have been very impressed with HBO's television adaptation of George R.R. Martin's work, for the most part. The books depict the fight for control of the Seven Kingdoms of Westeros between members of several major houses. Martin analyzes many topics in thee very long books, among them the nature of gender in a feudal society, the irrationality of hereditary government, and especially the meanings of political power in a society where everyone carries a sword and "might makes right" is a generally accepted ethos.

The TV series has done an excellent job of animating these concepts by actually improving on Martin's plotting by adding scenes and interactions between characters which do not appear in the original text.
What the TV series has not done well is depict people of color. There is an important subplot in the series which involves action on a far-away continent (across the Narrow Sea from Westeros) called Essos where the Dothraki people like. The Dothraki are a war-like, nomadic people who have "copper skin and almond eyes." In the books, Martin is able to fully explain their specific cultural traditions and motivate their harsh and violent actions. In the HBO series the head of the Dothraki Khal Drogo is portrayed by a massively buff Jason Momoa who speaks in a  rough guttural tongue. The Dothraki are depicted as wild-eyed savages for the most part, without the  descriptive context the book supplies them. This is unfortunate, because the chapters of the books which involve the Dothraki and the blonde refugee from Westeros named Daenerys Targaryen who becomes their Queen (Khaleesi) are some of the best sections of the story. Martin won a Hugo award for a novella about Daenerys.

In the series there are some epic scenes involving Daenerys, the Dothraki and her dragon eggs which, if depicted badly, could ruin the entire series for me. Daenerys and the Dothraki are incredibly important characters, and it is disturbing that, so far, they have not been depicted as effectively as the other, predominantly white, characters. It's no coincidence that the upcoming fifth book is called, A Dance with Dragons. Hopefully, the series will make that far.
Posted by Ron Buckmire at 6/02/2011 02:18:00 AM