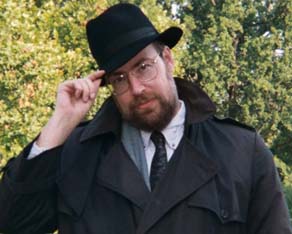 John C. Wright is a well-known science fiction author who has become even more well-known thanks to the record 5 (count-em FIVE) Hugo nominations he garnered this year, presumably as a result of being placed on the slates of two groups called (respectively) the Sad Puppies and Rabid Puppies.

PuppyGate, as it is sometimes called, has roiled science fiction fandom and things have apparently reached a fever pitch this weekend when the Nebula awards were announced and a month-old Facebook post calling the Puppies "unrepentantly racist, misogynist, and homophobic" by a employee at TOR books (a prominent publisher of science fiction) named Irene Gallo was publicized. Mr. Wright objects to being called "homophobic" and made this contribution to a very active comment thread at TOR.com


I am not unrepentantly homophobic. I am nothing of the kind. It is a lie.

I follow the Catholic teaching on same sex attraction and how one deals with it. In public, I have heaped scorn on those who use a children’s cartoon, one I loved, to insinuate their pro-perversion propaganda in a cowardly and craven way.

I have no hate, no fear, nothing but respect for homosexuals.

You and people like you who use the false cloak of compassion for homosexual to lure them into ruining their lives, you are the ones for whom I have no respect. You are the ones who hate them; you are the one who urge them down ever darker paths.

One of my family members committed suicide because he pursued the homosexual lifestyle you and yours continually urge him and poor souls like him to pursue.

You are the ones who offer a drunk a drink before he gets behind the wheel of a car, and when Christian urge sobriety, you claim our motive is fear and hatred for the drunk, not prudence and compassion.

So he says he is not homophobic but then he 1) uses terms like "pro-perversion propaganda," "homosexual lifestyle" 2) compares homosexuality to alcoholism(!) and 3) re-affirms his belief in the Catholic "compassion" of "love the sinner, hate the sin"! Plus he re[eats the trope of the sad homosexual who commits suicide early to end his dark, sorrowful life.

As another commenter at Tor.com responded to these sentiments this way:


John C Wright, you are a homophobe.I appreciate that you don’t understand that you are, that you feel there is some important distinction between making the statements you do out of religious duty rather than hate or fear, but that distinction is a false one. You say homosexuals ruin their lives, are perverts, that they must be brought away from their sexuality, that their lives go down dark paths, that it leads them to suicide. You believe people are homosexual because they have been urged to be, not because they quite simply, naturally, are.I know you see that as right and true, but it is not. You are treating homosexuals as less than yourself because you truly, genuinely believe that they are. That is homophobia. You are a homophobe.

And there ya go. (This comment is one of the most frequently favorited in the comment thread at Tor.com.) Maybe john C. Wright doesn't think that he is homophobic, but his own written words express virulently homophobic sentiments, which as an author he is probably only presenting words in public which reflect his clear and true beliefs. So there, he is a homophobe.