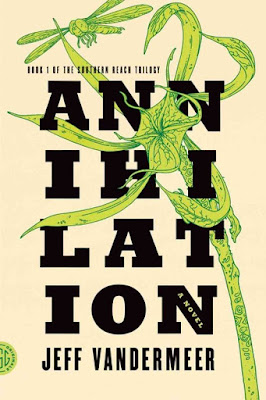 In a year in which awards for science fiction are under enhanced scrutiny due to the kerfuffle about the Hugo Awards (see file770.com for more details) the Science Fiction Writers of America chose a book that has not been nominated for the Hugo to with the 2015 Nebula Award: Annihilation by Jeff VanderMeer.

Annihilation is Book 1 in what is known as the Southern Reach trilogy and is an example of what some people are calling the new Weird. I tried it but it didn't really do anything for me. The good thing about the book is that it is very short (barely over 200 pages) so it is a very quick read.

Last year Ann Leckie's Ancillary Justice basically dominated all the science fiction awards, becoming a rare Hugo-Nebula winner. The one thing we know for sure this year is that we will not have a Hugo-Nebula double winner since Annihilation was not nominated  for the Hugo. We won't know how close Annihilation was to being one of the Hugo nominees if there had not been shenanigans during this year's nominating process until the full tallies of the Hugo awards voting and nominations are released during the 2015 WorldCon (i.e. Sasquan) which is being held in Spokane Washington in late August.
Posted by Ron Buckmire at 6/07/2015 12:28:00 PM