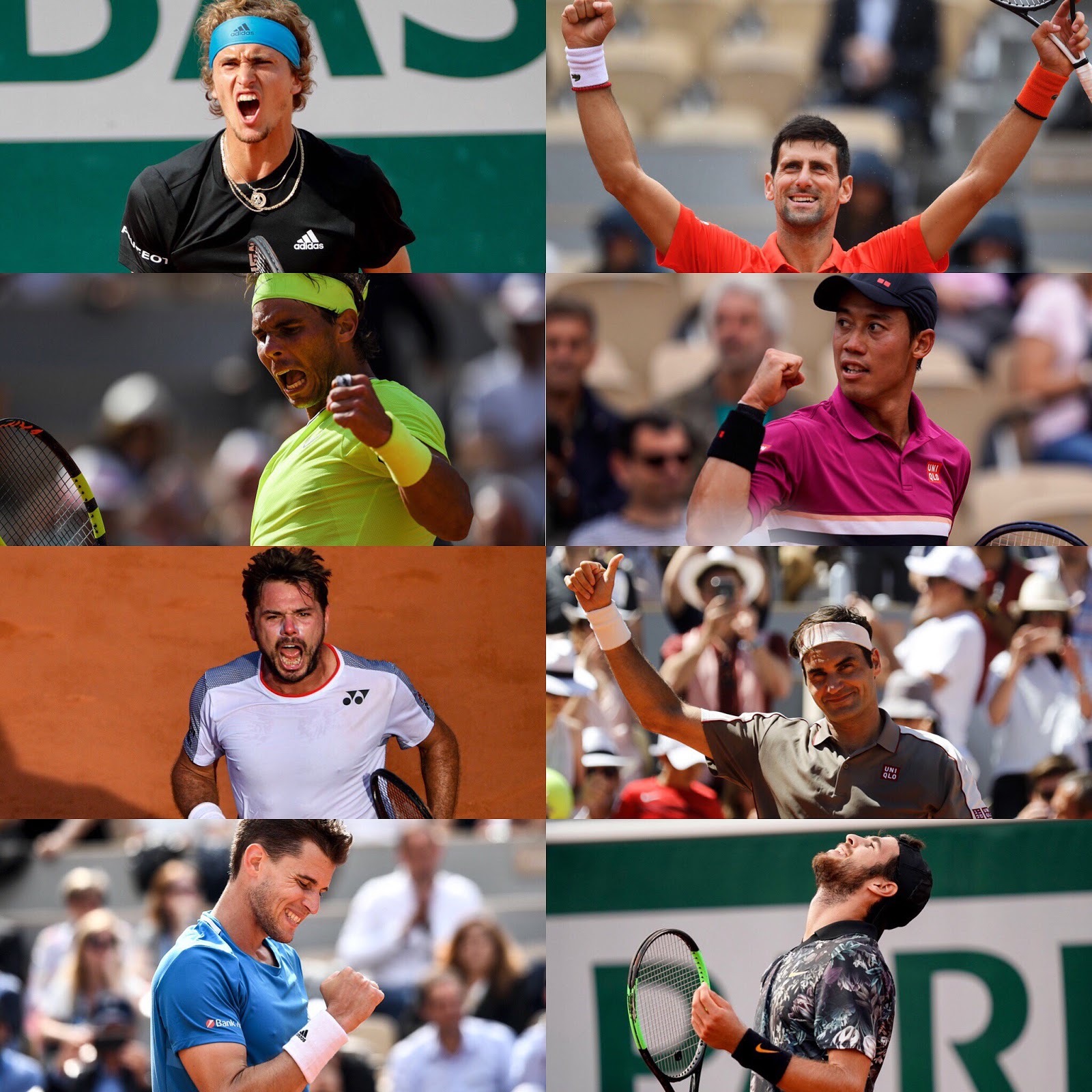 Novak Djokovic (SRB) [1] vs Alexander Zverev (GER) [5].  Djokovic has yet to lose a set  at this year's tournament and now has an amazing 25 match winning streak at Grand Slams as he goes for his second career "Nole Slam." He is going for his thirty-fifth major semifinal, while his opponent is going for his first. Interestingly, Zverev has an even head-to-head from the four matches the two have played, which is notable because while there are only 80 players who have played at least 4 matches with Djokovic only one person has a winning record (Andy Roddick!) If Zverev does win the match tomorrow, he would be in rarefied company. But  I don't think that's going to happen. Mad Professah's pick: Djokovic.

Dominic Thiem (AUT) [4] vs Juan Martin del Potro (ARG) [8] Karen Khachanov (RUS) [10].  Last year's finalist Dominic Thiem has been surprisingly vulnerable at this year's tournament, losing a set in every match he played except the latest one, which was a mind-numbingly routine win over an in-form Gael Monfils who had not lost a set getting to the fourth round and then could not win a single one against Thiem. In fact, Monfils has never won a set against Thiem and has given him a walkover win twice in the 8 matches they have been scheduled to play. Khachanov is a NextGen player who reached his first major quarterfinal by outlasting a mildly injured Juan Martin del Potro. Interestingly, Khachanov and Thiem have only played once before and the younger player has the win, and it occurred in Paris last year, while Khachanov was winning the Paris Masters title in the Fall. In fact, Khachanov is on a 10-match winning streak in Paris, so that should give him some confidence, but I don't think it will prevent Thiem getting to the Roland Garros semifinals for  the fourth consecutive year. Mad Professah's pick: Thiem.

Roger Federer (SUI) [3] vs Stefanos Tsitsipas (GRE) [6] Stan Wawrinka (SUI) [23]. Wawrinka played the best match of the tournament, and probably the year with Stefanos Tsitsipas, a 5-hour-9-minute, 5-set match in the round of 16. Wawrinka is a 3-time major champion, including winning the 2015 French Open which is where he took out Roger Federer in the quarterfinal on his way to winning the title that year after Djokovic eliminated the King of Clay in the quarterfinals. These two Swiss players have met 25 times on the tour and Federer has an imposing 22-3 lead. However all 3 win by Wawrinka have occurred on clay, but Federer still has an overall 4-3 lead on the surface and 6-1 in majors (although only one of  their matches has gone to 5 sets, which was one by Federer on his way to winning the 2017 Australian Open). Is that a presage of the result in this match? Mad Professah's pick: Federer.

Rafael Nadal (ESP) [2] vs Kei Nishikori (JPN) [7]. Two of Nishikori's four matches here have been 5 sets while Nadal has only dropped a single set in 4 matches, with numerous breadsticks and bagels handed out. Nishikori has 2 wins (compared to 10 losses) against Nadal, but neither of the wins have been on clay or in 5 sets. Nadal's record at Roland Garros is 90-2. It doesn't seem likely that one of these very historic results will happen against Nishikori. Mad Professah's pick: Nadal.
Posted by Ron Buckmire at 6/03/2019 08:00:00 PM