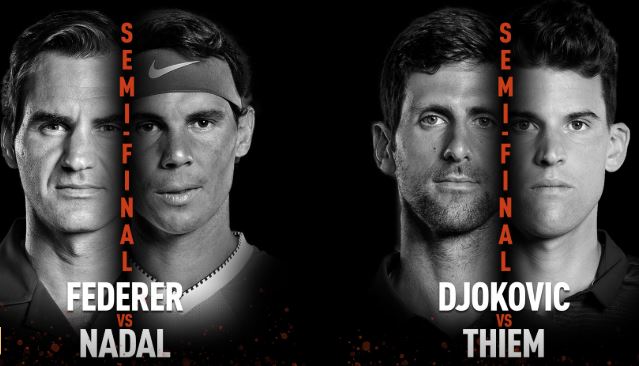 Unlike the women's tournament, where there will be a first-time grand slam winner and there are two unseeded teenage players in the semifinals, the men's tournament features a player in his 4th consecutive Roland Garros semifinal, and he's the least accomplished player of the quarter remaining in the draw! This is the 8th meeting between Djokovic and Thiem and the 15-time major champion leads 6-2, including 3-2 on clay. But Thiem beat Djokovic in the semifinal round here 2 years ago in straight sets, when Djokovic was close to his nadir. However, the World #1 has now won 26 Grand Slam matches in a row and there's pretty good chance that he will win his second career Nole Slam on Sunday. Such a feat would cement his status as the future G.O.A.T, ahead of his two contemporaries in the golden "trivalry" of Federer-Nadal-Djokovic. Only the Prince of Clay stands in his way from a potential (record!) 55th meeting with Nadal in the final of Roland Garros on Sunday, the most difficult feat in tennis, one that he has accomplished once before. It's hard to bet against him, and I wouldn't. Mad Professah's pick: Djokovic.

Well here we are! After skipping the clay for the last three years in the second wind of his career to concentrate on winning Wimbledon, Federer surprised the tennis world by agreeing to play the clay season. I agree with most observers who think this will probably be the last time we see Federer play on clay, and this is one reason he is happy to have made the semifinals (and the concomitant ranking points) as well as this last opportunity to meet Rafa on clay, where he has lost 13 of 15 matches the two have played.  Interestingly, this semifinal result is the best Federer has had in the last four slams, having lost in the fourth round in Australia (to Stefanos Tsitsipas) and New York (to John Millman) and the quarterfinal (to Kevin Anderson). Presumably, he expects his results in the next four slams to be decidedly better as he prepares to retire after the Tokyo Olympics (as he chases the elusive Singles Gold medal). This Federer-Nadal XXXIX or #Fedal39 and even though Federer has won the last 5 meetings against Nadal (bringing the head-to-head deficit to only 15-23 thanks to a tennis racquet with a larger head and a more forceful and aggressive topspin backhand) the matchup has never been great for the Swiss Maestro, especially on clay. I would love for Federer to win this match, but I find it hard to even see him winning a set, frankly. And I'm okay with that. I wish the draw had been different and Thiem was in Federer's half and Nadal in Djokovic's. Then I would think there's a VERY good chance of a Federer-Djokovic final. This year, I don't think that's gonna happen. Mad Professah's pick: Nadal.
Posted by Ron Buckmire at 6/07/2019 12:02:00 AM