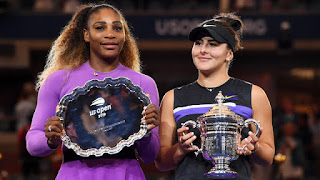 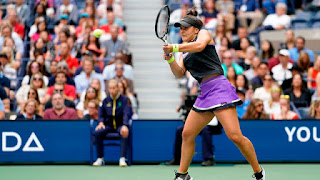 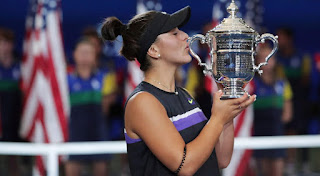 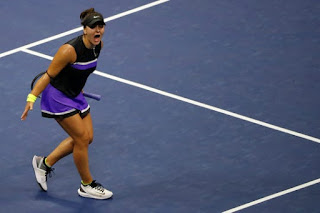 Defying my prediction, Bianca Andreescu defeated Serena Williams in the women's final of the 2019 U.S.Open 6-3 7-5 to win her first major final. The 19-year-old Canadian became her country's first major title winner (of any gender) and the first player born since 2000 to win a major title. (There is still no player born in the 1990s or the 2000s who has won a major title on the ATP tour.)


HOW THE TITLE WAS WON
For the fourth time in a row that she has played in four major finals since returning after getting married and having a baby, Serena was unable to play her best tennis. Despite winning the first point with an ace, Serena still got broken in her very first service game, by hitting a double fault on breakpoint. In fact, this was an augur of things to come, because Serena had an awful serving performance today, with only 44% of her first serves going in (compared to 66% of Andreescu's). But even from the back of the court, Andreescu was able to match (and at time, outmatch) Serena's power, and most definitely consistency. For the second US Open in a row, Serena played a player more than a decade younger who had won the Indian Wells tournament and who was completely unfazed by playing in her first major final. Some people say that Serena lost these matches to Osaka and Andreescu because the younger players played the "best match of their lives." I strongly disagree. They played well, but not extraordinarily so. Andreescu is always aggressive and today was no different. After losing in the first round of qualifying last year (and the year before), the 19-year-old won the entire tournament in her first maindraw appearance. In fact, she has won her first 8 matches against Top 10 players and will make her debut in the Top 10 herself at #5 on Monday. How many more majors will Andreescu win? Time will tell, but she appears to be the multi-slam winner women's tennis has been waiting for.
Posted by Ron Buckmire at 9/07/2019 08:38:00 PM