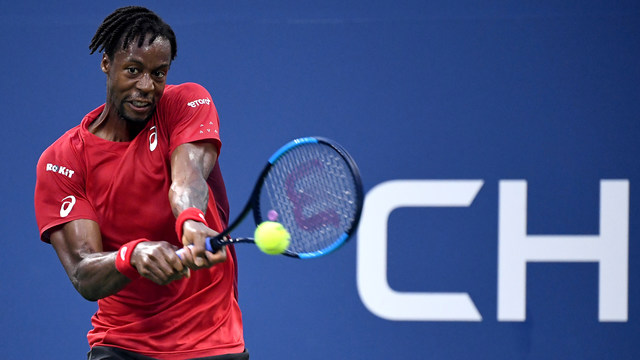 Novak Djokovic (SRB) [1] Stan Wawrinka (SUI) [23] vs Daniil Medvedev (RUS) [5].  The World #1 and defending champion had made his way through the draw rather uneventfully until he ran into a diesel truck named Stan. The 3-time champion who is on his way back up the charts after  very serious knee surgeries basically bullied Djokovic around the court for two and a half sets until the 16-time major champion retired from the match, citing a shoulder injury. Medvedev is the latest of the #NextGen players to break through, having won his first Masters series shield in Montreal during his red-hot summer.  The two have only played only once before, in 2017 on grass (Wawrinka's worst surface), with Medevedev winning. The Russian has been making it through matches by will (fueled by the vocal opposition of the New York City crowds). This scenario should repeat itself again, but this time he'll be facing someone who can take advantage of it. Mad Professah's pick: Wawrinka.

Roger Federer (SUI) [3] vs Grigor Dimitrov (BLR). Formerly known as "Baby Fed," Dimitrov has had a horrendous year and a half since he reached his career-high ranking of World #3 after winning the ATP's Year-End Championships (over Davis Goffin). His ranking had fallen out of the Top 50 before this tournament, so it is miraculous that he was able to reach his first quarterfinal in New York this year. Hopefully this will turn his season around because he is too talented to not be "in the mix" on tour although at 28 he is part of the Lost Generation that the Big 4 denied tennis' biggest prizes. Unfortunately for Grigor he faces Federer, whom he has played 7 times and only won 1 set in the 18 the two have played. Hopefully he will do better than Goffin did in Federer's previous round, who only managed to win 4 games in a best-of-five match. Mad Professah's pick: Federer.

Matteo Berretini (ITA) [24] vs Gael Monfils (FRA) [13]. This is a first-time meeting between these players. Berretini is one of the breakout players of 2019, having already won two tour titles this year. The 23-year-old is listed at 6-foot-5 and 198 pounds while 32-year-old Monfils is "only" 6-foot-4 and 187 pounds. This is an incredibly important match for both players, as every major quarterfinal is. It's Berretini's first but Monfils' 9th. Oftentimes, the older player suffers in this situation with the knowledge of how rare these opportunities are but it can also happen that the younger player is overwhelmed by the occasion. This is basically a "call-em" match and that situation I go with the better athlete. Mad Professah's pick: Monfils.

Rafael Nadal (ESP) [2] vs Diego Schwartzman (ARG) [20] Alexander Zverev (GER) [6]. Diminutive Diego took out Sascha Zverev in four sets the round before, despite playing on the German's best surface and his worst. He has reached 2 other quarterfinals before, but it probably won't matter. He faces Nadal, whom he has played 7 times and only won 2 sets (not in the same match), losing every time. Nadal is playing in devastating form and unless an injury shows up, should make it to another US Open final. Will Federer be waiting for him there?  Mad Professah's pick: Nadal.
Posted by Ron Buckmire at 9/03/2019 10:53:00 AM