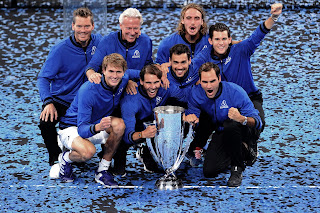 EUROPE WINS LAVER CUP FOR 3RD CONSECUTIVE YEAR
The Lave Cup is a new team competition (begun in 2017) dreamed up by Roger Federer and his agent Tony Godsick a few years ago modeled on the very successful Ryder Cup in golf. Two teams (World and Europe) compete in singles and doubles over a weekend in host cities that move around the world. This year the competition was in Geneva, Switzerland (next year it will be in Boston, Massachusetts and last year it was in Chicago, Illinois). One of the key delights of the Laver Cup is the ability to see legends like Rafael Nadal and Federer interacting together and combining to coach younger players who they are usually rivals with (like Stefanos Tsitsipas, Alexander Zverev and Dominic Thiem). Federer is still undefeated in three years in singles. This year World came the closest to winning the Laver Cup when Jack Sock stunned himself (and everyone else) by beating Fabio Fognini. The American then teamed up with John Isner and defeated the Federer/Tsitsipas to give World its first-ever lead in Laver Cup. However, Federer beat Isner in singles and Zverev (for the second consecutive year) won the deciding match, this time in a Super Breaker 10-7 over Milos Raonic. 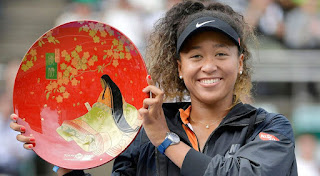 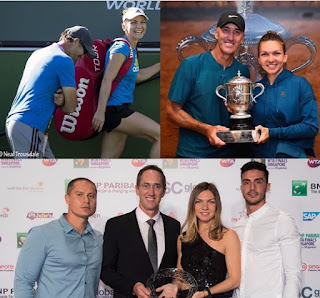 HALEP ANNOUNCES COACHING REUNION WITH DARREN CAHILL FOR 2020
After winning her second major title at Wimbledon 2019 without his (official) assistance, Simona Halep has announced that she will be reuniting with her coach  Darren Cahill for the 2020 season. Presumably her focus will be to win one of the two hard court majors (and perhaps an Olympic medal?) in 2020.
Posted by Ron Buckmire at 9/24/2019 12:47:00 PM